Gena Showalter is releasing a new contemporary romance series, “The Original Heartbreakers“. The One You Want, a prequel novella (and currently free), was released on March 1st, 2015. The Closer You Come will release March 31, 2015. I am huge, huge fan of Gena’s paranormal romance and am really excited to venture out into her contemporary world.

We asked Gena “Do you approach your writing differently when writing in this contemporary genre with different potential readers in mind?”

She replied, “I approach all my books the same way, no matter the subgenre, because it’s never about the world to me, or even the audience, but about the characters themselves and my vision for their lives. Writing with readers in mind would actually be a handicap. Sorry! But it’s true. It’s impossible to please everyone, and what one loves another will hate.” 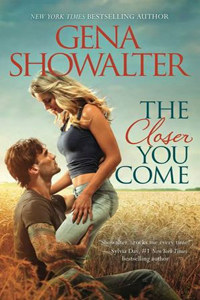 New York Times bestselling author Gena Showalter introduces the Original Heartbreakers, where three not-quite-reformed bad boys are about to meet the women who will bring them to their knees.

Just released from prison, Jase Hollister has only one goal: stay out of trouble. Strawberry Valley, Oklahoma, sounds like the perfect place for him and his two brothers-by-circumstance to settle down and live a nice, simple life. Model citizen isn’t exactly this rugged bachelor’s default setting—especially when it comes to a certain hot-blooded Southern beauty—but he’s determined to play by the rules.

Brook Lynn Dillon has always been the responsible type. Not that it’s done her much good. The down-on-her-luck waitress is broke, single and wouldn’t know fun if it bit her. Or so she thinks. Jase makes bad look oh, so good. Dangerous, sexy and tempting as sin, he is everything she never knew she wanted. Passion sizzles between them, but is it enough to melt his resistance? After all, the right kind of trouble might be just what he needs…

My Viking Vampire ~ Meet the Author with Giveaway