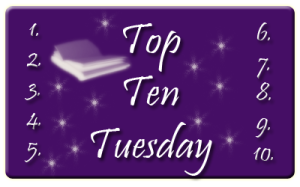 Topic for April 8, 2014 is Top Ten Most Unique Books I’ve Read (maybe the MC was really different, maybe it was the way it was written, a very unique spin on a genre or topic, etc.)

You would think that with all the paranormal romance and urban fantasy that I read, that this would be an easy task. I am finding that despite the different series, there always seems to be commonalities throughout them all, which makes it hard to find something truly unique. This list will be far from ten, but they are a few that have stood out enough to make me think of them when I saw the topic.

So I’m going to stick to five. I’m sure once I hit publish 5 more will come to me. What are a few of the most unique books you’ve read?

Top Ten Tuesday ~ Books That Were Hard To Read