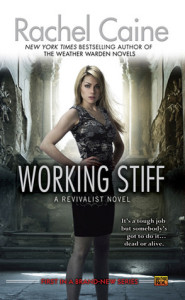 Bryn Davis was killed on the job after discovering her bosses were selling a drug designed to resurrect the dead. Now, revived by that same drug, she becomes an undead soldier in a corporate war to take down the very pharmaceutical company responsible for her new condition...

I was pretty sure I was going to like this one. It was about zombies, of COURSE I was going to like it. Well, I discovered a prejudice I have. I think I prefer, sluggish, flesh falling off beings that normally are in a bad guy role. I was not prepared for the type of zombie we are introduced to in Working Stiff by Rachel Caine.   I am prejudiced against good-looking, pass off as human, zombies.  The next book might fix that though once I get used to the idea.  Oh you know what I just thought of, now I am bad with names so someone remind me of the title, but isn’t there a movie with Goldie Hawn where she trying to keep her body from falling apart?

I digress.  The story was pretty well paced with some good unexpected scenes.  I did not see the ending coming.  It definitely surprised me.  Honestly though, I think I didn’t see it because I wasn’t paying enough attention.  I don’t think I got swept up in the story and it made reading the hard.  I didn’t feel the intensity that normally grabs and holds my attention.

There was a bit of a love interest, but it did not take a big role in Working Stiff.  Just a little nibble.

Because this is the first book in a series, I will likely give it the “second book test”.  Let’s see if we can break my mental image of a zombie!
Read for:  Book Club
Challenge: 2013 Ebook Challenge