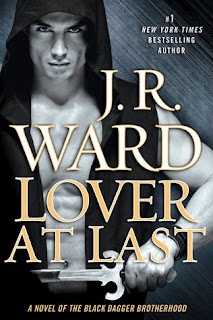 Qhuinn, son of no one, is used to being on his own. Disavowed from his bloodline, shunned by the aristocracy, he has finally found an identity as one of the most brutal fighters in the war against the Lessening Society. But his life is not complete. Even as the prospect of having a family of his own seems to be within reach, he is empty on the inside, his heart given to another….

Blay, after years of unrequited love, has moved on from his feelings for Qhuinn. And it’s about time: The male has found his perfect match in a Chosen female, and they are going to have a young—just as Qhuinn has always wanted for himself. It’s hard to see the new couple together, but building your life around a pipe dream is just a heartbreak waiting to happen. As he’s learned firsthand.

Fate seems to have taken these vampire soldiers in different directions… but as the battle over the race’s throne intensifies, and new players on the scene in Caldwell create mortal danger for the Brotherhood, Qhuinn finally learns the true definition of courage, and two hearts who are meant to be together… finally become one.

I think Lover At Last by J.R. Ward was one of the most anticipated books of the… well… year?  I know it was for me because I absolutely adore the Black Dagger Brotherhood.  I was excited, however I was also a bit leery.  I was a m/m virgin.  Yes, I know, the whole Quay thing had been building and I knew it was coming, but I always kind of pushed it to the side.  Now it was right there, front and center, no avoiding it.

Due to my lack of knowledge on the m/m literary world, I’m just going to say that the sex scenes fit my expectations.  You have two warriors, and I didn’t really envision these long, romantic sex scenes.  I expected raw, earth shattering, (furniture shattering), desperate sex.  I think that is what I got.

Ok, I’m sorry, I do not, and I don’t think I will ever like, Xcor.  I know a lot of people are all for that Xcor and Layla connection, but…. no, Wrath must take care of that creep.  What I am thinking is going to happen (and this is just in my imagination and has in no way been instigated by the author) is Layla is going to tame Xcor enough that Wrath will end up bringing the Band of Bastards into the royal circle.  Essentially they are doing the same thing by fighting the Lessers, and the only thing stopping the combination is Xcor’s determination and hate of Wrath.  Let’s knock Xcor out of the way, bring in the Band of Bastards, then we have new blood.  Or start training some new guys.

I am very interested the Assail story line.  Sola sounds like a very interesting character and I can’t wait to see how the new drug lord’s relationship is going to work out.

Quinn was a badass warrior in this book, and I know he did some pretty noteworthy acts, but I was still surprised by his reward.  When it came to this reward, I was expecting it to be a group thing, especially how close the Quinn/Blay/JM connection is. Speaking of badass though, there were some really great action scenes, and let me say Hollywood is still my guy!

All together, I’m giving Lover At Last a 4 star rating.  I took a star because I sometimes got confused on what scene or who’s POV I was in due to there being so much going on.