Posted February 10, 2021 by Tanya in Waiting on Wednesday / 0 Comments 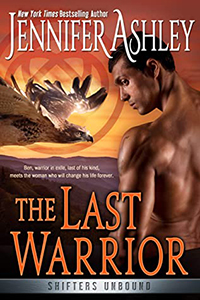 Ben, the last of a warrior race destroyed by the Fae, has lived a thousand years in exile and now has found a place among the Shifters. He’s the caretaker of a sentient house outside New Orleans, and the Shifters turn to him when they’re in dire trouble. Even so, Ben is aware of his aloneness, his people gone forever.

Rianne, daughter of the powerful Lady Aisling, is in a jam. She’s pursued by an ambitious and ruthless Fae lord–marriage to her will help him become emperor. Rianne sees only one escape, to flee her home for the world of humans and Shifters.

But for that, she’ll need a guide and a protector.

Ben just happens to be handy, using his skills to help other enemies of the Fae. Lady Aisling asks him for the favor of his life—to take Rianne to a Shiftertown and look out for her, even if it means putting him in the most danger he’s faced since his final battle with the Fae.

Rianne is reluctant to trust her fate to the unknown Ben, but she soon finds the human world, the Shifters, and most of all Ben, have captured her fascination, and possibly her heart.

It seemed like there was a big space between Shifters Unbound books but now we are catching up. I’m particularly excited about this book because it is Ben’s story. He has been so mysterious in all the previous books and I’m dying to dig in and find out more about him. He is matched with Lady Aisling’s daughter, whose existence was just revealed in the previous book. So yeah, definitely want to read this series in order! It will really make you appreciate how important these characters are.

The Last Warrior releases February 16, 2021! I need to prepare. I don’t see a date for the audio yet, but I will be impatiently twiddling my thumbs and saving an Audible credit for this one! I don’t know if Cris Dukehart will be the narrator again. I sure hope so!

So, definitely pick this up! If you haven’t gotten this far in the series … hurry hurry hurry! If you are a shifter lover like me, you won’t regret it!