Today we have the release blitz of Promise of Darkness by Bec McMasters! Check it out and be sure to grab your copy today! 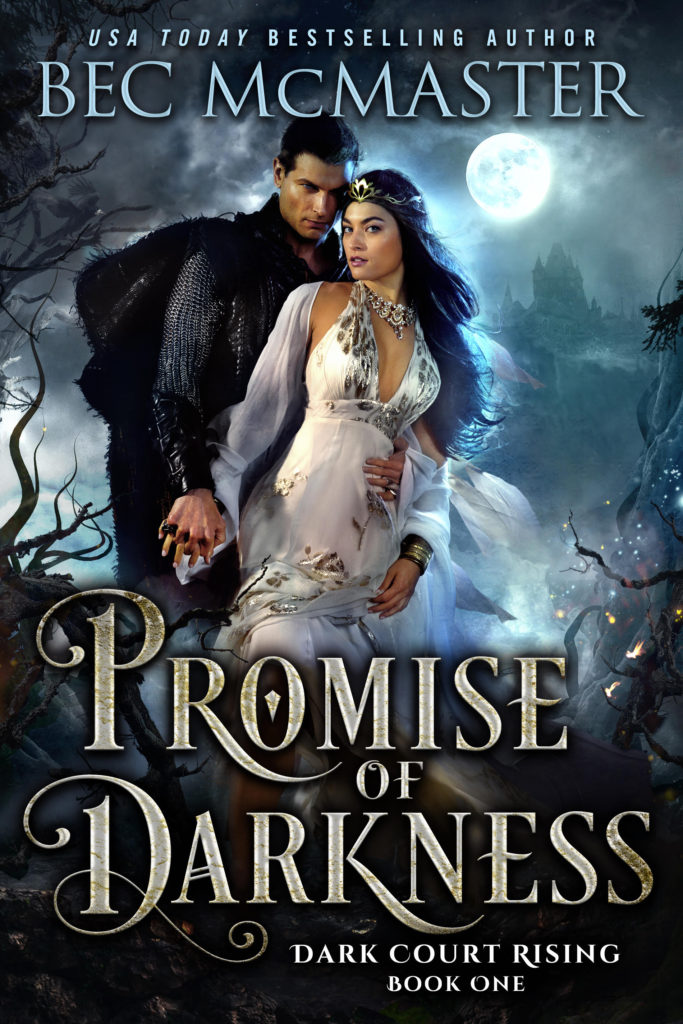 About Promise of Darkness:

Princess. Tribute. Sacrifice. Is she the one prophesied to unite two warring Fae courts? Or the one bound to destroy them?

In a realm ruled by magic, the ruthless Queen of Thorns is determined to destroy her nemesis, the cursed Prince of Evernight.

With war brewing between the bitter enemies, the prince forces Queen Adaia to uphold an ancient treaty: she will send one of her daughters to his court as a political hostage for three months.

The queen insists it’s the perfect opportunity for Princess Iskvien to end the war before it begins. But one look into Thiago’s smoldering eyes and Vi knows she’s no assassin.

The more secrets she uncovers about the prince and his court, the more she begins to question her mother’s motives.

Who is the true enemy? The dark prince who threatens her heart? Or the ruthless queen who will stop at nothing to destroy him?

And when the curse threatens to shatter both courts, is her heart strong enough to break it?

A fairytale twist inspired by the Hades and Persephone myth.

Get Your Copy Today:

The prince eases both doors to his bedchamber shut and leans against them with a sleepy look in his eyes. “How are you feeling?”

“Like I just took a knife for you,” I point out, wobbling a little, though I’ll be damned if I show it. Surviving my mother’s court gives me a good grounding to face him like this. It doesn’t matter how much blood you’ve lost, you don’t dare faint in front of my mother or her people.

Especially not when I’m standing in front of the monstrous bed he just set me down in front of.

“And I’m grateful, but shouting a warning would have been just as effective.”

“I’ll consider that next time.” Along with simply standing aside and letting the assassin complete their task.

An enormous thronelike chair reclines by the fireplace, and thick, woven rugs are scattered across the stone floors. Everything’s been made on a scale to both impress and threaten, though there’s a sense of luxuriousness I hadn’t expected. Silk sheets on the bed. Luscious velvet throws in a dark mulberry color. The silvery ruff of fur just begging me to lie upon it.

A pair of sconces linger by the bed, and a sheer curtain is tied to the wall. Thiago moves to light the candles in the sconces, becoming little more than a shadow behind the gauze, his cloak flaring behind him like a pair of wings. I shiver, wrapping my arms around myself as I examine every inch of the room.

That bed is big enough for ten.

“Not what you expected?” The prince blows out the taper he used to light the candles, and a ring of smoke curls toward the ceiling. He watches me through it.

It’s exactly what I expected.

The two of us.

“Where are all the skulls?” I joke, instead. “The bodies of your vanquished enemies?”

There it is. The suggestion we’ve both been dancing around. “And if I don’t care to?” The treaty only requires that I spend the three months in his court. Not that I serve as concubine.

The prince shrugs, slipping the cloak free of his shoulders. It pools around his ankles like a swathe of pure night, then he crosses to the decanter to pour two goblets of wine. “Your loss, Your Highness.”

I stare into the wine he gives me. “Let us establish some rules.”

“Rules, Princess?” A wicked smile crosses his mouth. “I don’t play by the rules.”

I’ve spent years playing word games in my mother’s court. “Come now. Let’s not pretend you made this request because you’re interested in the pleasure of my company for three months—”
“You might be surprised.”
“You want something from me. What?”

“What would you give?”

Nothing. But without anything to offer, I have little to bargain with. “A kiss.”

“A high price to pay.” His eyes darken as he considers his wine. “Once a day.”

Once a week would be preferable—or never—but I nod slowly. “Once a day.”

“If you keep your hands off me.”

“A kiss once a day, for the next three months. No more, no less, unless you initiate it.” He repeats it twice more. “Spoken thrice, my oath upon it.”

“My oath upon it,” I agree, and feel the magic bind us together.

What have I done?

I’m a writer. Dreamer. Travel Addict. And enthusiastic-if-not-perfect baker. I’ll honestly admit that I don’t always follow the recipe, be it cooking, or writing romances. If I’m not sitting in front of the computer, I’m probably plotting my next world trip. Or eating chocolate. Sometimes I run. Because…chocolate. I grew up on a steady diet of 80’s fantasy movies like Ladyhawke, Labyrinth and The Princess Bride, and love creating epic, fantasy-based worlds with heroes and heroines who must defeat all the odds to have their HEA. I live in a country town in Australia, with my very own beta hero, Byron; Kobe, a dog who will eat anything (even used teabags); and demanding chickens, Siggy and Lagertha.

Preorder Spotlight and Giveaway ~ The Hotter You Burn by Gena Showalter