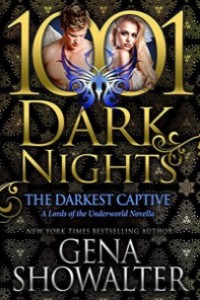 For centuries, Galen the Treacherous has been the most hated immortal in the Underworld. With good reason! This bad boy of bad boys has lied, stolen, cheated and killed with abandon. Possessed by the demons of Jealousy and False Hope, he has always lived for a single purpose: destroy everything.

Then he met her.

Former demon turned human femme fatale — Legion Honey — sought to kill Galen, but ended up parting with her virginity instead. Afraid of their sizzling connection, she ran away…and ended up trapped in hell, tortured and abused in the worst of ways. Now she’s free, and a shell of herself, afraid of her own shadow.

Galen’s hunger for Legion has only grown. Now the warrior with nothing to lose must help her rekindle the fire that once burned inside her. But as desires blaze white-hot, will Legion run again? Or will the unlikely pair succumb to love at long last?

On December 4, 2018, Evil Eye Concepts releases a 1001 Dark Nights novella with Gena Showalter! The Darkest Captive will be the newest novella in the Lords of the Underworld series. I think everyone has been waiting for Legion and Galen’s story and we’ll finally get it. I’m still a story behind, and I will admit, my memory is failing me on the happenings with some of the characters, but I am very excited to see what happens with Legion and Galen!

As always, the 1001 Dark Nights novellas are all written to be standalone stories in a series so you don’t have to be caught up with the series or have even read any of the series at all to be able to read these. I’m a little leery about that claim with this couple but if I don’t get to The Darkest Warrior before December 4th, I’ll jump into this novella.

The 1001 Dark Nights novellas have become extremely popular with some amazing authors and I’m sure this is going to be another great installment.