Posted November 8, 2017 by Tanya in Waiting on Wednesday / 3 Comments 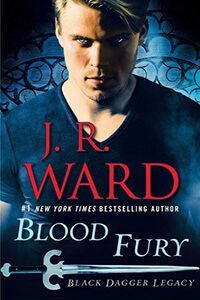 A vampire aristocrat, Peyton is well aware of his duty to his bloodline: mate with an appropriate female of his class and carry on his family’s traditions. And he thought he’d found his perfect match—until she fell in love with someone else. Yet when his split-second decision in a battle with the enemy endangers the life of another trainee, Peyton has to face the idea that his future, and his heart, actually lie with another.

Novo, as a female in the Black Dagger Brotherhood’s training program, feels like she has to prove herself to everybody—and she has no interest in being distracted by falling in love. But when Peyton proves to be so much more than a rich playboy, she is forced to confront the tragedy that has broken her soul and closed her off from love.

I really felt bad for Peyton in book one. He was such a great guy, but just not the right one for Paradise. I’ve been wanting to see him finally get some of the love I think he deserves. I can’t wait to dig into this one! Oh and we get to see Saxton and a possible HEA for him?! It’s release date isn’t until January 9, 2018, but I’m keeping my eyes peeled for the virtual signing I’m really hoping J.R. Ward has for the hardcover! I am addicted to her virtual signings as it seems like she is never anywhere close to me. And I’m addicted to her books, so, must-buy right? I am surprised they haven’t come out with it yet. Normally they hold them a pretty good time in advance, and with the holidays coming up I would think they would want to do this sooner rather than later. Come on wardenvs.com! Let’s get us a Blood Fury virtual signing!