Posted September 21, 2016 by Tanya in Waiting on Wednesday / 5 Comments 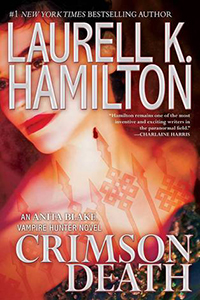 Anita has never seen Damian, her vampire servant, in such a state. The rising sun doesn’t usher in the peaceful death that he desperately needs. Instead, he’s being bombarded with violent nightmares and blood sweats.

And now, with Damian at his most vulnerable, Anita needs him the most. The vampire who created him, who subjected him to centuries of torture, might be losing control, allowing rogue vampires to run wild and break one of their kind’s few strict taboos.

Some say love is a great motivator, but hatred gets the job done, too. And when Anita joins forces with her friend Edward to stop the carnage, Damian will be at their side, even if it means traveling back to the land where all his nightmares spring from…a place that couldn’t be less welcoming to a vampire, an assassin, and a necromancer.

The Anita Blake series has come a long way. It’s had many ups and downs. A lot of readers have come to a point where, for one reason or another, they were done with the series.

There is just something with this series for me that keeps me coming back. I felt the downslide we had, but I continued on. Now I feel like we are pulling things together and the series is returning to my original love.

Crimson Death is going to take us out of the USA and into unknown territory for Anita. We are also going to have Edward along for the ride, which will be great. It will be a crap shoot as to who will be tagging along for Anita’s needs, but I’m hoping they won’t be a major issue in the story. There are definitely going to be some new aspects and I can’t wait to see how Anita deals with them. Crimson Death releases October 11, 2016. Get ready for an exciting ride as we dash across the pond to help our Damian!