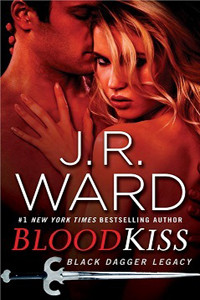 Paradise, blooded daughter of the king’s First Advisor, is ready to break free from the restrictive life of an aristocratic female. Her strategy? Join the Black Dagger Brotherhood’s training center program and learn to fight for herself, think for herself…be herself. It’s a good plan, until everything goes wrong. The schooling is unfathomably difficult, the other recruits feel more like enemies than allies, and it’s very clear that the Brother in charge, Butch O’Neal, a.k.a. the Dhestroyer, is having serious problems in his own life.

I have been a fan of the Black Dagger Brotherhood for years and despite the last few books kind of winding down, I still love the characters. I am excited for this spin off because not only will we get to see more of the Brotherhood, but we get these new faces that could totally refresh the series. Lara Adrian kind of did the same thing with the Order, where she jumped into the lives of the children to keep the story and romance going. Blood Kiss: Black Dagger Legacy releases on December 1, 2015. Click on the cover to go pre-order!