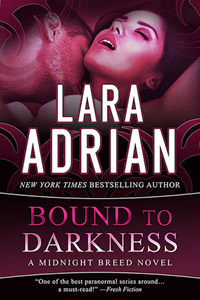 Carys Chase is accustomed to making her own rules and letting her heart lead the way–no matter what anyone else has to say about it. A rare Breed female and a daywalker as well, headstrong, beautiful Carys is one of the most powerful of her kind. She lives passionately and loves without limits, especially when it comes to the lethal cage-fighting Breed warrior called Rune.

Unbeatable in the ring, Rune exists in a brutal world of blood and bone and death. He’s made his share of enemies both in and out of the arena, and his secrets run as deep and turbulent as his past. A dangerous loner who has survived by his fists and fangs, Rune has never allowed anyone to get too close to him…until Carys. But when the bodies buried in his past rise up to threaten his present, Rune must choose between betraying Carys’s trust or putting her in the crosshairs of a battle neither of them can hope to win on their own.

I am so excited for a new Midnight Breed novel! I was wondering how long it was going to take for Lara Adrian to completely separate from her publisher and be able to get more of the Midnight Breed out as self-pub. Lara Adrian has always been great for sharing new exciting things and I just know that she’s going to make this self-pub endeavour so much fun for her and all her fans. The possibilities are endless!

Bound To Darkness releases July 30, 2015 by the brand new Lara Adrian, LLC. I have learned from her newsletter that she will be doing a virtual signing as well, so keep your eyes peeled for info on that!