Posted February 18, 2015 by Tanya in Waiting on Wednesday / 3 Comments 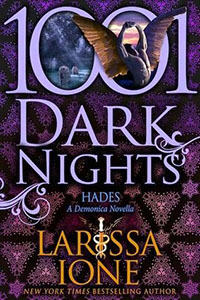 A fallen angel with a mean streak and a mohawk, Hades has spent thousands of years serving as Jailor of the Underworld. The souls he guards are as evil as they come, but few dare to cross him. All of that changes when a sexy fallen angel infiltrates his prison and unintentionally starts a riot. It’s easy enough to quell an uprising, but for the first time, Hades is torn between delivering justice — bestowing or mercy — on the beautiful female who could be his salvation…or his undoing.

Thanks to her unwitting participation in another angel’s plot to start Armageddon, Cataclysm was kicked out of Heaven and is now a fallen angel in service of Hades’s boss, Azagoth. All she wants is to redeem herself and get back where she belongs. But when she gets trapped in Hades’s prison domain with only the cocky but irresistible Hades to help her, Cat finds that where she belongs might be in the place she least expected…

I have been immersed in this world for months now listening to the audiobooks in the Demonica / Lords of Deliverance series. Just from the glimpses of Hades we’ve seen so far, I can’t wait to read a story based on him. I know it’s a novella, but I will take it. Whatever I can get from this world, I will grab with greedy hands. Hades is part of the 1001 Dark Nights compilation and will be released May 26, 2015.