Posted February 20, 2019 by Tanya in Waiting on Wednesday / 0 Comments 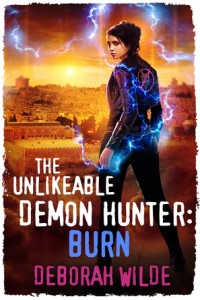 It’s the End of the World as We Know It…

Nava has come a long way from being a hot mess flying solo. She’s now one of the major players on the chessboard, leading the charge against a witch with dark magic, a power-mad rabbi, and the impending apocalypse.

Friends will die and secrets will be exposed. Add imprisonment, torture, and the biggest, baddest demon of them all who has plans for her, and it’s a lot for a girl to take in.

Time to rally the troops and make her last stand, because she’s damned if she’ll let the end of the world get in the way of her romantic, sexytimes galore, happily-ever-after.

The heart-pounding final installment to the series.

I’ve had a love/hate relationship with this series. However, the last book ended on a bit of a cliffhanger, and this IS the last book of the series, so I just have to read it. I will be waiting for the release of the audiobook though, as that is how I’ve read the other books in the series. I am really hoping that this has a great ending to the series. The Unlikeable Demon Hunter: Burn releases March 5, 2019. I really hope the audio releases soon after, I’m dying of curiosity on how this will all end!

Waiting On Wednesday ~ Venom In The Veins by Jennifer Estep @Jennifer_Estep