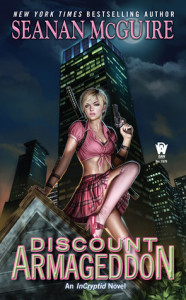 Ghoulies. Ghosties. Long-legged beasties. Things that go bump in the night... The Price family has spent generations studying the monsters of the world, working to protect them from humanity-and humanity from them. Enter Verity Price. Despite being trained from birth as a cryptozoologist, she'd rather dance a tango than tangle with a demon, and is spending a year in Manhattan while she pursues her career in professional ballroom dance. Sounds pretty simple, right? It would be, if it weren't for the talking mice, the telepathic mathematicians, the asbestos supermodels, and the trained monster-hunter sent by the Price family's old enemies, the Covenant of St. George. When a Price girl meets a Covenant boy, high stakes, high heels, and a lot of collateral damage are almost guaranteed. To complicate matters further, local cryptids are disappearing, strange lizard-men are appearing in the sewers, and someone's spreading rumors about a dragon sleeping underneath the city...

Discount Armageddon is set in a world where there are some pretty strange creatures and Verity Price, along with her family, police and protect these monsters.  I found Verity to be a very cute character.  Her cuteness fooled me when it came time to fight the bad guys.  She really was pretty kick-ass, I just didn’t expect it from the young sounding voice from my audiobook.

The story brings Verity and a member of the Order of the Covenant together to solve the mystery of the disappearing cryptids, and the possibility of a sleeping dragon beneath the city.  Verity and Dominic try hard to work together, despite their completely opposite views on the cryptids.  They are looking for the same thing, but what happens when it is found could be the thing that pulls these two apart.  We do get a teensy bit of sexual tension between Dominic and Verity, but their family’s past and what one might need to do to the other when the mission is over has them keeping up a wall or two to protect emotions.

We cannot write a review of Discount Armageddon without mentioning the talking mice.  These mice that celebrate and worship everything Verity does, or that her family has done in the past.  Verity has to be pretty sneaky to get any time to herself, and that caused a few giggles.

Overall I found Discount Armageddon to be a cute read.  I have a feeling it was supposed to be darker than I found it, but I just didn’t get pulled in deep enough.