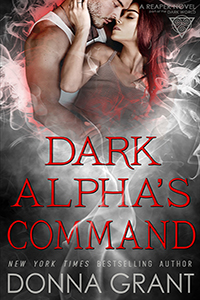 From New York Times bestselling author Donna Grant® comes another action-packed installment in her thrilling Reaper series, featuring a brotherhood of elite assassins who wage war on the Fae at Death’s behest—and the women who dare to love them.

I’ve been a part of so many different worlds I’m not sure who I am or where I fit in anymore. Honestly, with everything I’ve been through, being called across realms and encountering the beautiful Druid who instantly captures my attention—and my heart—shouldn’t have surprised me. But it did. Not as much as discovering how it feels to brush against her magic, however. Now, we must navigate these new waters and fight against our latest threat, hoping that our combined power and that of our allies is enough to defeat our foe. Because the Fae Others want to end the Reapers, the Dragon Kings, and take over the realm, and their leader is one of the most formidable enemies we’ve ever faced. The battle won’t be easy, but with this strong, resilient mortal by my side and some help from our friends, it’s a fight I’m more than willing to enter—as long as it means she’s by my side. Forever. 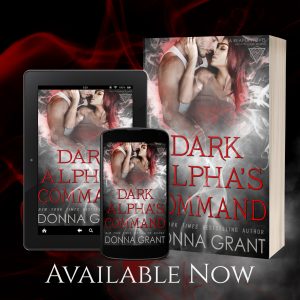 Balladyn’s eyes snapped open, his heart racing as he gasped for breath. The yawning, opaque terror occurred abruptly, like a hard punch to the gut. Only one thought went through his head: find it.

Without hesitation, he teleported to the Fae doorway. Just before he stepped through, he remembered his vow to Death. Balladyn clenched his jaw at the physical pain that gripped him when he halted. He needed to find Erith and tell her what was happening. But the thought of wasting that time when he could be searching for whatever called to him made him want to bellow with annoyance.

He was being pulled in two.

Erith’s calm voice reached him. He turned his head to the goddess and stared into her lavender eyes.
She looked him over before lifting her chin, a small frown puckering her forehead. “What is it?”

“I…don’t…know,” he managed to get out. The alarm and distress were so boundless he could barely speak. He braced his hands on either side of the doorway. It was the only way to stop himself from just walking through—and hopefully ending the torment that had him in its merciless grip.

Erith nodded to someone on Balladyn’s other side. He didn’t bother to look. It was most likely her consort, Cael. Balladyn dropped his chin to his chest. He had to go. He needed to leave.

Right that instant. If he didn’t…

“You want to leave.”

It wasn’t a question. “I have to,” he ground out. His body shook as he fought to remain where he was. Every second was excruciating. If he left, the agony would end. He didn’t know how he knew that, only that the knowledge was there.

He squeezed his eyes shut. The words stuck in his throat as the pain intensified. The compulsion to find whatever called to him across the realms was too great to resist. He parted his lips, wanting to tell Erith what he felt, but he couldn’t. Balladyn pushed away from the doorway and started to walk through it.

Her order froze him immediately. The ensuing deluge of despair made him throw back his head and bellow. He had to get…fek. He had no idea where he needed to go, only that he had to go. Immediately.

“Follow him. Don’t let him out of your sight,” he heard Erith say. Then, “Go, Balladyn.”

The instant she released him, he was through the doorway. He let whatever pulled him determine his course. He was mildly startled to find himself not just on Earth but in Belfast. He paused long enough to orient himself in the narrow, old-town street. The night was cold and rainy. Lights strung over the road and suspended from each building lit the area and reflected in the puddles on the ground as locals and tourists rushed to get out of the rain.

Balladyn didn’t look behind him to see who followed. All that mattered was locating who or what had reached through time and space to him. His head snapped to the right when he felt the sharp tug again. He strode down the street until he came to a narrow alley. He heard nothing over the steady beat of the rain. When he turned to go down the lane, he felt a hand on his shoulder.

“This could be a trap,” Eoghan cautioned.

Balladyn looked into the molten, silver eyes of the Reaper who led their team. “I have to.”

Eoghan released him and nodded, letting Balladyn know without words that his team was there and would watch his back.

Balladyn blinked the rain from his eyes and started walking. With every step, something urged him to hurry. He was running by the time he reached the end where it opened to a small area. He slid to a stop and let his gaze scan the space. It was dark and quiet. Nothing stirred. Then he smelled it—blood.

The sound of a slight cough reached him. His head swung to the side, and he made out the shape of someone on the ground. Balladyn rushed over. The instant he knelt and saw the red hair, his breath caught. He found himself staring into the beautiful face of Rhona, the head of the Skye Druids.

“What the hell?” Bradach asked in a shocked whisper.

Balladyn glanced down at Rhona’s body and found her hands clutching her abdomen, blood running quickly through her fingers. Her heartbeat was faint, her breathing shallow. She wouldn’t live much longer. Certainly not long enough for him to get her anywhere that someone could help her.

Another bellow rose within him. He didn’t know what Rhona was doing in Ireland or what had happened to her, but he couldn’t let her die. Not like this.

But she didn’t move. Suddenly, he remembered reading about some ancient magic in one of the books in his library. Without hesitation, the words he had read filled his mind. The magic sprang forth and wrapped around Rhona.

“What the hell did you just do?” Ruarc demanded.

Balladyn lifted Rhona in his arms. “I have a library of books. I made use of some ancient knowledge in one. This won’t last long. She’s lost too much blood. We have to get her to safety.”

“She could be a trap for us. I hate to say it, but the Six could’ve learned of our connection to Skye through Sorcha and me,” Cathal said.

Rordan grunted. “Not only is Rhona Sorcha’s cousin, but she’s also the leader of the Druids.”

“We’ll find our answers later,” Eoghan said. “Cathal, fill Erith in on everything and return with Sorcha. Dubhan and Bradach, you two take a look around. See if you can spot any of the Fae Others, the Six, or their soldiers. The rest of us are going to Skye.”

Balladyn didn’t wait for Eoghan to finish speaking before teleporting inside Rhona’s cottage. It was dark inside, but he saw well enough to make his way down the hall to her bedroom. He gently laid her on the bed. When he stepped back and saw the blood on his arms, his heart clutched painfully.

Balladyn turned his head to Eoghan. “We need Druids.”

“Can we trust them?” Ruarc questioned.

Eoghan blew out a breath as he flipped on the light in the room. “We don’t have a choice. Rhona needs their healing.”

No sooner had he spoken the words than Cathal arrived with Sorcha. Tears welled in her eyes the minute the Druid spotted Rhona on the bed. “I’ll get the others,” Sorcha said and turned to her mate.

The urgency driving Balladyn had stopped when he found Rhona. He didn’t know if she had called to him or if it had been something else. As far as he knew, no one could penetrate time and space to reach a Fae other than Death. Not even someone as powerful as Rhi could do that. So how had the message reached him?

“The Druids aren’t going to be happy to see all of us,” Eoghan pointed out. “We need to remain veiled.”

Ruarc grimaced. “Should we even stay?”

“I’m not leaving her,” Balladyn stated.

Eoghan quickly said, “None of us is. We need to know what happened.”

They could only get answers through Rhona, and only if the Druid lived. Balladyn kept his gaze on her hands. There was more blood than he’d initially realized. It soaked her wet clothes. The magic he used had paused it, but he had no idea how long that would last. The Druids needed to get there. Soon. 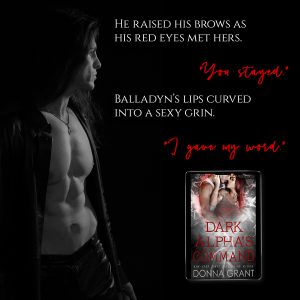