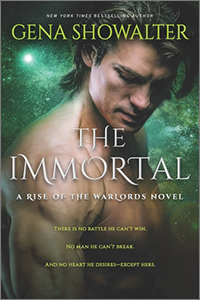 Halo Phaninon, assassin of gods, is as cold and merciless as a machine. For victory, he crosses any line. When tasked to kill twelve of mythology’s fiercest monsters in twenty-four hours, Halo eagerly accepts. Except, each morning he awakens to the same day, forced to relive new horrors. Only one other person retains their memory—the beauty who threatens his iron control.

Ophelia the Flunk Out hates her disaster of a life. She’s the family disappointment, a harpy warrior without a kill and powerless—or is she? Nearly every night she’s doomed to repeat her own murder, but each morning she arises to spar with Halo, the ruthless warlord increasingly determined to save her…and lure her to his bed.

Halo’s insatiable desire for the stubborn Ophelia drives him wild…and he only craves more. If he remains in the time loop, they stay together. But if he escapes, they lose each other forever.

I love Gena Showalter’s harpies. They are deadly and kick ass. For us to see Ophelia the Flunk Out was a lot of fun. She gets caught up in a challenge that the assassin Halo must complete where he has to battle 12 of the most deadly monsters alive. Halo accepts the task, but then for some reason find that both him and Ophelia are stuck in a time loop. Neither understands why Ophelia is included in this Groundhog Day. But then Erebus reveals bit by bit why she is included.

Ophelia keeps the secret she learns from Erebus in hopes of saving Halo. But her instincts make it hard to control her situation. I was really hoping that Ophelia would just trust in Halo and find an answer together. But that is not the harpy way. She wants to make her first kill and increase her harpy status, plus save Halo.

I really loved Halo. He starts out as his assassin self but he comes out of his shell for Ophelia, so for me, when he finds out how she has been betraying him I was crushed at the change in him. Trying to protect himself from her.

Erebus frustrated the crap out of me. He makes a good sneaky villain, despite how much I wanted to scream at him. I guess that’s the point of a villain, right?

This series is a lot of fun. Harpies take their war skills so seriously and their attitudes always make me laugh. To pair one with an Astra assassin makes for an entertaining romance build. Add in the serious dangers and challenges makes for a perfect mix for me. I can’t wait for the next one!