Posted August 4, 2021 by Tanya in Waiting on Wednesday / 0 Comments 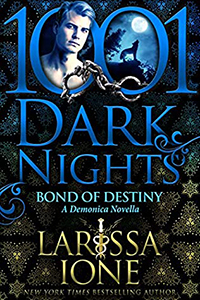 Sold into slavery mere hours after his birth to werewolf parents, Tracker spent decades in service to cruel underworlders. Then the fallen angel Harvester transferred his ownership to a human woman who gave him as much freedom as the unbreakable bond would allow. Still, thanks to his traumatic past, he’s afraid to trust, let alone feel love. But when an acquaintance shows up at his door, injured and in need of help, he finds himself longing for a connection. For someone to touch. For someone to care.

Stacey Orr has had it bad for Tracker since the day her best friend, Jillian, was forced to hold his unbreakable slave bond. At first, the fact that he’s a werewolf seemed weird to Stacey, but hey, her best friend was married to one of the Four Horsemen of the Apocalypse, so weird is definitely a matter of perspective. Stacey knows the depths of Tracker’s trauma, and she longs to help him even as he helps her, but breaking through his walls isn’t easy.

And it only gets harder when the only blood family he has, the pack that gave him away, lays claim to him… and everything he loves.

I love everything about the Demonica world and get excited every time I see that something is coming out. These novellas have brought in side characters that we really didn’t think much about in the main books, yet still connect. Bond of Destiny releases August 24, 2021 so make sure to grab it. The great thing about these extra novellas is that they are written so that anyone can jump in. So jump in and then you’ll want to go all the way back to the beginning!

Waiting On Wednesday ~ Frost and Flame by Gena Showalter @GenaShowalter

Waiting On Wednesday ~ The Beast By JR Ward