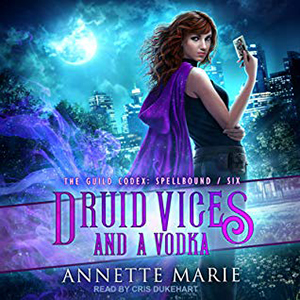 I've said it before, but sometimes I'm a bad person. I cheated on my twelfth grade math final, I've run countless yellow lights, and I gossip about how hot my kickass best friends are. (Good thing my job as a guild bartender doesn't require moral perfection.)

But there's bad, and then there's bad. And I'm not sure which applies to a certain dark druid/wanted criminal/reluctant friend of mine. His transgressions include black-magic dealings, kidnapping, and murder, and he's about to add "revenge-fueled killing spree" to his resume—if I don't stop him.

Should I stop him?

He and his nemesis are gearing up to tear each other apart, rogues and vultures are converging with their sights on the spoils, and the guilds that would normally stomp them into the ground are under attack. We're on the brink of an all-out criminal turf war, and my time to decide is almost up.

I don’t even know how to put into words how blown away I was with this installment. So many things not going the way I expected! I was a fan of a particular druid, and actually hoped something would happen between him and Tori at one point. Well, until I got on board with the whole Tori and Ezra thing. I still liked him though. But wow, things totally went wrong there.

SO many things went wrong here. I feel like I was left hanging on everything I thought was set in stone in this series. The book was exciting with the gang trying to deal with a returning criminal. We also have to deal with a bounty hunter who may know more secrets than he should. Unfortunately all this is happening when Tori is on the countdown to try and help Ezra. It is a high speed, adrenaline filled listen until you reach the dreaded ending.

What a freaking ending! I don’t know where to go from here. I was left with so many questions! What is the Crow and Hammer going to do from here?! What is Tori going to do? And so on and so on. If you haven’t picked up this series yet, I really urge you to. It has continued to improve with each installment.

Cris Dukehart does an awesome job, as usual. I love her voices for these characters and she really keeps pace with the storyline. The narration helps keep the adrenaline pumping. Definitely a great listen!