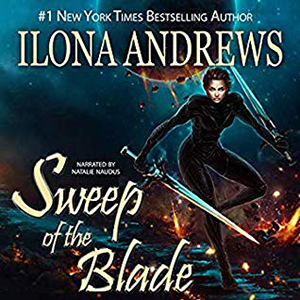 Maud Demille was a daughter of Innkeepers. She knew that a simple life wasn't in the cards, but she never anticipated what Fate would throw at her.

Once a wife to a powerful vampire knight, Maud and her daughter, Helen, had been exiled for the sins of her husband to the desolate planet of Karhari. Karhari killed her husband, and Maud had spent a year and a half avenging his debts. But now all the debts are paid. Rescued by her sister Dina, Maud had swore off all things vampire. Except she met Arland, the Marshal of House Krahr. One thing led to another and he asked for her hand in marriage. She declined.

Try as she might, she can't just walk away from Arland. It doesn't help that being human is a lot harder for Maud than being a vampire.

To sort it all out, she accepts his invitation to visit his home planet. House Krahr is a powerful vampire House, and Maud knows that a woman who turned down the proposal from its most beloved son wouldn't get a warm reception. But Maud Demille never shied from a fight and House Krahr may soon discover that there is more to this human woman than they ever thought possible.

I have to admit. I like Dina. But I really LOVE Maud. It was exciting that we were getting a story about her and Lord Arland!

Maud and Helen decide to travel back to House Krahr with Arland after the battle they had at Gertrude Hunt. Arland has made pronouncements and offers to Maud. He has become very attached to her. Despite House Krahr being a vampire house, something that Maud has sworn she will not involve herself in again, she follows Arland and is debating staying there.

Maud and Helen both deal with issues stemming from them being human in a vampire world. But these vampires totally underestimate the mother/daughter duo. Maud really makes a name for herself in the house. Arland knew he had chosen well and Maud proves it to everyone.

I loved seeing Arland’s pursuit of Maud and how he became such a fatherly figure to Helen. They just seemed to be a complete team. A team that is needed when everything starts to fall apart for House Krahr. It was ridiculous planning by these other houses that were invited to House Krahr. They certainly underestimated who they were dealing with, but also underestimated Maud and what a significant player Maude was in the game.

Sweep of the Blade was an exciting installment of the Innkeeper Chronicles. I liked getting Maud’s point of view and a little more knowledge of the vampire world. The different narrator successfully gave a voice to Maud which helped separate this story from Dina’s stories. This was an exciting story with a great HEA. I’m so glad I picked up this series!

Ernie is having fun while decorating! #pugs #pugre