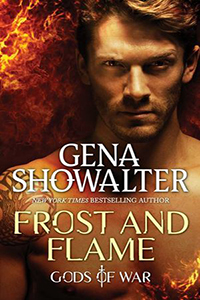 Bane of Adwaeweth is the most feared immortal warrior in All War history. Possessed by a bloodthirsty beast, he will stop at nothing to win. Then he meets irresistible Nola Lee. He hates the power she wields over him, but she alone can rain vengeance upon his wife’s killer.

Unaware of her destiny to rule as queen of beasts, Nola battles illness, addiction and vulnerability. With Bane, however, she experiences pleasure for the first time, and only wants more. But being with him comes with a terrible price.

With enemies lurking around every corner, Bane and Nola must fight to survive. But time is running out, and neither can resist the sizzling attraction blazing between them. Will their romance save the beast and his beauty, or destroy everything they’ve come to love?

Guys, I’m so excited for this second installment of the Gods of War series. I really enjoyed these characters in Shadow and Ice and am excited for their story. Frost and Flame releases September 17, 2019. This is just after Readers on the River and I have my fingers crossed that she will have copies of it for sale at her table on the con! I’ve heard she said there will be surprise and boy I hope this is it. I did specifically ask the question, but was told that they would talk to Gena about it. I would be one happy camper if that were the case!

This series is a little different, with different species of characters in an All War. The possibilities are endless and I’m really hoping this leads to a long lasting series. I definitely recommend it. But, of course, I recommend everything adult Gena Showalter writes so you have to know that going in. Make sure to pick this up, September 17, 2019. I’m definitely looking forward to it!

One thing though. Does the cover model for Frost and Flame look like the same one used for Burning Dawn and The Darkest Torment? They look alike to me! 🙂

Waiting on Wednesday ~ Bound By Flames by Jeaniene Frost