Posted November 7, 2018 by Tanya in Waiting on Wednesday / 0 Comments 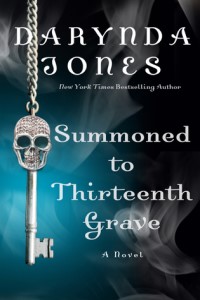 Charley Davidson, Grim Reaper extraordinaire, is pissed. She’s been kicked off the earthly plain for eternity – which is the appropriate amount of time to make a person starkraving mad. But someone’s looking out for her, and she’s allowed to return after a mere hundred years in exile. Is it too much to hope for that not much has changed? Apparently it is. Bummer.

Summoned to the Thirteenth Grave is a hugely anticipated book for me. Releasing January 15, 2019, the wait seems long. This is the final book in the Charley Davidson series by Darynda Jones. After the events at the end of the previous book, we are all desperate to know what happens to Charley. How is this series going to end? I’m dying to know as I’m sure all of you are too. Don’t forget to preorder. ALSO, Author Author is selling signed hard covers at their website! Make sure to grab one of those. You all know how nuts I am about virtual signings! The link to the site is above.

Here to help quench some of the anticipation, I’m going to include a special excerpt just for you!

It wasn’t until I felt the sun on my face that I knew, really knew, I’d
made it back. The bright orb drifted over the horizon like a hot
air balloon, blinding me, yet I couldn’t stop looking at it. Or, well,
trying to look at it. After giving it my all through squinted lids, I
gave up and closed them. Let the warmth wash over me. Let it
sink into my skin. Flood every molecule in my body.
God knew I needed it. I hadn’t had a drop of vitamin D in over
a hundred years. My bones were probably brittle and shriveled
and splintery. Much like the current state of my psyche.
But that’s what happens when you defy a god.
Not just any god, mind you. No siree Bob. To get booted off the
big blue marble, one had to defy the God. The very One a
particular set of children’s books called Jehovahn.
The Man had some serious control issues. I bring one person
back from the dead and bam. Banished for all eternity. Exiled to
a hell with no light, no hair products, and no coffee.
Mostly no coffee.

And, just to throw salt onto a gaping, throbbing flesh wound, no
tribe. In this dimension, the one with the yellow sun and
champagne-colored sand on which I now walked, I had a
husband and a daughter and more friends than I could shake a
stick at. But in the lightless realm I’d been banished to, I’d had
nothing. I floated in darkness for over one hundred agonizing
years, tormented by dreams of a husband I could no longer
touch and a daughter I could no longer protect.
She would be gone by now. Our daughter. I will have missed
her en- tire life. The thought alone shattered me. Cut into me like
shards of glass every time I breathed.
But I’d missed more than her life. It had been prophesied that
she would face Lucifer in a great battle for humanity. That she
would have an army at her back and, fingers crossed, a warrior
at her side. And that she would stand against evil when no one
else could.
I’d wondered for dozens of years if she’d won, the pain of not
knowing, of not being able to help, driving me to the brink of
insanity. Then I realized something and a peculiar kind of peace
came over me. Of course she’d won. She was the daughter of
two gods. More to the point, she was her father’s daughter, the
god Rey’azikeen’s only child. She would’ve been wily and
cunning and strong. Of course she won.
That’s what I’d told myself over and over for the last thirty-odd
years of my exile. But now I was back. An exile that was supposed
to be for all eternity stopped just short, in my humble opinion, of
its goal.
Unfortunately, I had no idea why I was back. I’d felt myself
being drawn forward, pulled through space and time until the
darkness that surrounded me gave way to the unforgiving
brightness of Earth’s yellow sun. That big, beautiful ball of fire
I’d so often complained about as a resident of New Mexico,
where sunshine was damned near a daily occurrence.
The horror!
And here it was, bathing me in its brilliance as my feet sank into
dew-covered sand with every step I took. I walked toward it. The sun.
Craving more. Begging for more.
“I will never complain about you again,” I said, tilting my face
toward the heavens, because the thought of my daughter
growing up without me wasn’t the only thing that had driven me to
the edge of sanity. Nor the heartbreak of missing my husband.
His hands on my body. His full mouth at my ear. His sparkling
eyes hooded by impossibly thick lashes.
No, it was the perpetual darkness that pushed me so far inside
myself I could hardly stay conscious.
I’d tried to escape. To find my way back to my family and
friends. Boy, had I tried. But it seemed like the harder I struggled,
the deeper I sank. The realm in which I’d been cast was like an
inky, ethereal form of quick- sand. If not for the wraiths . . .
I stopped and bent my head to listen. Someone was following
me, and for the first time since materializing on the earthly plane,
I tried to take in my surroundings. With my vision adjusting, I
could just make out the sea of peaches and golds that
stretched out before me. Sand as far as the eye could see.
Then it hit me. The Sahara. I’d been here before. With him.
I started walking again, slowly, making him come to me as I
used every ounce of strength I had to tamp down the elation
coursing through my veins.
I’d dreamed about this moment for so long, a part of me
wondered if it were real. Or if I were hallucinating. But I felt the
warmth radiating from his body and I knew. Heat—his
heat—pulsated over me in rich, fervent waves, stirring parts of
me that hadn’t been stirred in decades. Or churned. Or even
whisked, for that matter.
I dared a glance over my shoulder. My knees weakened and
my stomach clenched at the sight. Dressed as a desert nomad
in traditional, sky- blue garb, he followed at a leisurely pace. A
light breeze pressed his robe against his body, outlining his
wide shoulders, long arms, and lean waist.

A turban of the same sky blue had been wrapped around his
head and face until only his eyes shone through.
Dark. Shimmering. Intent.
Like that could fool me. Like I wouldn’t know my husband from
a thousand miles away. His essence. His aura. His scent.
Of course, the ever-present fire that licked over his skin, the
lightning that arced around him, didn’t hurt.
He moved like an animal. A predator. Powerful and full of
confidence and grace. Every step calculated. Every move a
conscious act.
And he was closing in.
I turned back to the horizon, my heart bursting with the
knowledge that my husband was still here. Still on Earth. Still
sexy as fuck.
And yet, there was something not quite . . .
I whirled around to face him when I realized part of what I
was feeling, part of the tangle of tightly packed emotions that
made Reyes Reyes, was anger.
No. Not anger precisely. Anger would be far too tame a word.
He was livid. Furious. Enraged. And it was all directed at me.