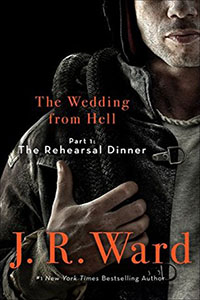 The Rehearsal Dinner by J.R. Ward
Series: The Wedding From Hell #1
Published by Simon & Schuster on July 17, 2018
Genres: Contemporary Romance

Don’t miss #1 New York Times bestselling author J.R. Ward’s three-part ebook serialization: The Wedding From Hell. This exclusive prequel to her upcoming standalone suspense Consumed (available in October 2018) takes us back to where it all started between arson investigator Anne Ashburn and ‘bad boy’ firefighter Danny Maguire. The Wedding From Hell is a sexy standalone novella that sets up Consumed’s storyline, leaving fans hungry for more and dying to snatch it up.

The Wedding From Hell, Part 1: The Rehearsal Dinner: It’s a classic recipe for disaster: Take one bridesmaid who thinks pink is the root of all evil, mix with a best man who’s hotter than a four-alarm fire, add in their explosive sexual attraction, a nightmare bridezilla, two cat fights, and an emergency call, and you have the wedding from hell.

We are being treated with an introduction to our main characters from J.R. Ward’s Consumed, due out October 2, 2018. We meet Anne Ashburn and Dannyboy Maquire as they are thrown into the wedding party of a fellow firefighter that just shouldn’t be getting married.

In the midst of the wedding drama, Anne and Danny fight their attraction to each other. Danny knows his feelings are deep but he has a bad rep for one nighters and getting over that is going to be tough. As well as what could happen with a relationship among co-workers.

It was nice to get to know the relationship between these characters before we jump into the true action of Consumed. We don’t learn too much beyond the attraction between the two, and the craziness of their best friend Moose’s wedding.

The tension between Anne and Danny kept me reading and encouraged me to jump right into The Reception. I can’t wait to see if the attraction between these two explodes!