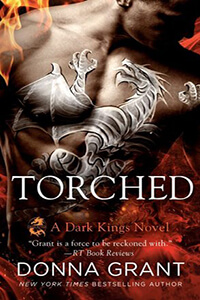 The King of Silvers. Cunning, perceptive, resourceful. Determined. Banished from Dreagan eons ago because of a betrayal that shattered his entire existence, his sole focus in life is to exact revenge against the Dragon Kings. A formidable fighter with centuries of rage on his side, Ulrik will stop at nothing to take down those who exiled him.

He has been alone, trusting no one for thousands of years. Until she walks into his life. He should not yearn for her, but there is no stopping the fiercely burning attraction. When he’s with her, he isn’t thinking of war or revenge. He only thinks of her, craves her. Burns for her. But soon he will be forced to choose: Will he continue on his course of destruction or will he be able to set aside his vengeance to save the woman who risked everything for him.

I think Torched has been one of the most anticipated stories of this series. Ulrick has been banished from Draegan for centuries and has been building up his revenge and challenge to Con all this time. There may be spoilers for the previous books in this review so if you haven’t started the Dark Kings yet, you may want to stay away from this review.

I know Ulrick is supposed to be an evil character and he started out on my bad side with a lot of the things he had done. But when it came to light that he actually didn’t do all the things he was being accused of doing, I felt hope for him in my heart. He did still conspire with the Dark Fae, but he continued his friendship with Rhi. Rhi wouldn’t have put up with him too much if she thought he was pure evil. After the discovery of the other dragon seeking revenge, Ulrick seemed to get more defensive of the Dragon Kings. For me, all the bad stuff fell to the other guy.

Ulrick is fearless and confident. His approach to handling his intended killer was pure Ulrick. So self-confident. But I love that she was able to bring out even more of the man of mystery and make you feel things for him. We know his story all along throughout the series, but you don’t really get Ulrick’s true feelings of betrayal and loss. Those feelings really come through in Torched and Ulrick tore open my heart and moved right in.

After all that Ulrick faces in Torched, alongside his potential mate, I think the book worked towards a compromise I really agreed with and was happy about. I’m not sure how things will continue because there are still wars to fight, and there are still Dragon Kings to find their mates, but I felt like this book was a BIG one, that has the potential to steer the series into a new direction.

Torched was definitely emotional and there were a lot of ups and downs for both our main characters. I love these two as a couple. They compliment each other so well and she doesn’t put up with any of his crap. I look forward to how the Dragon Kings will contain the remaining conflicts in their lives. I’m also a little concerned for humans, but I think there are enough human mates that the possibility of the dragons turning against humanity is slim. The build up to the upcoming wars is exciting and we have a major power that needs put in her place. But who is going to be the one to do it! I can’t wait to find out. I’m also still desperate to find out who Rhi’s Dragon King was and if they will ever come together again.

This series is exciting with all of it’s action and romance. The perfect combo to keep you on the edge of your seat, engrossed in the story for all hours.