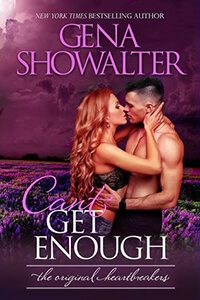 The king of one-night stands…
To inherit–and destroy–his father’s business at long last, Brock Hudson needs a wife. The ruthless ex-military heartthrob has always avoided romantic entanglements. Women are sweet, but vengeance will be sweeter. Or so he thinks. Only one woman will do, but the vulnerable beauty is more than he bargained for—sexier, wittier, and utterly irresistible.

The queen of the deep freeze…
After an abusive first marriage, Lyndie Scott has sworn off relationships. But still she longs for a child of her own. Turns out, the brawler who frightens her with only a glance is the answer to her problems. She agrees to his proposal, with a caveat: spend every night in bed with her, then walk away for good when it’s time to divorce. Even if she’s pregnant.

A marriage of breathtaking inconvenience…
As the days pass too quickly and the nights heat up, Brock battles a sense of possession and obsession. Will the former commitment-phobe convince his wife they’re better off together, or will she pack her bags and go?

Can’t Let Go releases next week, and I’m dying for that one. But right on it’s heels is Can’t Get Enough! I don’t know how Gena is putting these out so fast! I have to go back because I think I missed book 3. I’m having a hard time keeping up. But Strawberry Valley is definitely the place to be if you want to meet up with some hot, irresistable men!

Gena does an amazing job putting together a contemporary environment (I’m a die-hard Lords of the Underworld fan) with lots of romance and humor. Her writing always pulls me in and I can get wrapped up in a menagerie of emotions as our characters go through the different stages of their relationships.

I am especially interested in Can’t Get Enough because these two characters we’ve met in Can’t Hardly Breathe and I’m sure will be in Can’t Let Go. They are both really interesting characters and I am dying to see how this couple overcome their problems. I’m especially curious to see how Brock would react to Lyndie leaving the marriage if she was pregnant! I can’t see him taking that lightly.

Can’t Get Enough releases December 5, 2017 and as of this writing, the preorder was only $4.99. Only available for Kindle right now, but will probably pop up at your other favorite retailers before release date. You’ve got to visit Strawberry Valley! A lot happens here for such a small town. Plus the inhabitants will keep you laughing throughout the book.

Waiting On Wednesday ~ Break The Day by Lara Adrian @Lara_Adrian

Waiting On Wednesday ~ How To Love Your Elf by Kerrelyn Sparks