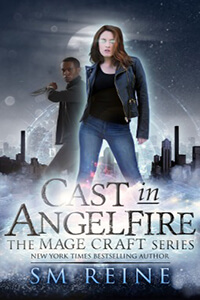 Eighteen-year-old Marion can’t remember anything before waking up in the hospital. All she knows that a lot of people want to kill her. And her would-be assassins are not human…

Vampires are real. So are faeries and angels.

They all want Marion dead.

Surrounded by enemies, Marion turns to Lucas Flynn: a mysterious doctor who seems to know more than he’s letting on. He’s as good with a gun as he is with a scalpel. He fights like a demon but claims that he’s human. And he’s hellbent on protecting Marion.

Lucas claims that Marion is a mage: half-witch, half-angel with terrifying powers that could crack the world. But Marion can’t remember how to cast magic any more than she can remember where she comes from.

Marion must find her identity and her power…before the forgotten sins of her past catch up with her.

Cast In Angelfire starts with our heroine, Marion, waking up in a hospital bed after an assassination attack. She remembers nothing about who she is, or why anyone would be trying to kill her.

Marion enlists the help of her “human” doctor to help get her to where she thinks her family is. They catch up with Connig, from the Autumn Court, who insists that Marion is his girlfriend. Marion and Lucas follow him back to the court where she finds she is treated like a princess. The problem is, she is still getting attacks. She can trust no one.

Cast In Angelfire kept me guessing on who was on Marion’s side and who was trying to kill her. She gets glimpses of her past whenever her and Lucas touch, but that is not very often. He tries to avoid the two of them touching as much as possible. I’m still a bit confused on his insistence in protecting Marion. Especially considering her enemies are all fae and he claims to be a human. Now I thought this was going to turn into a love triangle, which really would have driven me nuts, but Lucas’s determination not to touch Marion skin to skin kind of kept it from going in that direction.

Rebecca Mitchell did a good job with the narration. There was good inflection in the characters voices, even when Marion gets a bit whiny.

I’m glad that this series continues on and hopefully Marion will gain more of her memories, especially after the surprise at the ending. She sets herself up pretty well for future installments. 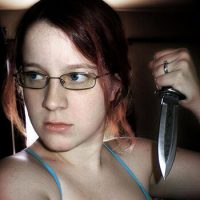 Hi everyone! My name is Sara, and I write urban fantasy and paranormal novels as SM Reine. I collect swords, cat hair, and typewriters (which I do use for writing!). It’s a good day when those three things have nothing to do with each other.

If you would like to know the instant my next book is available, you should enlist in my Army of Evil! We have a wicked cool secret handshake, but you’ll have to sign up to learn it. 😉 Check it out — http://smarturl.it/armyofevil