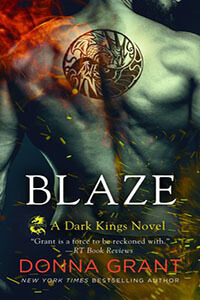 His strength, his masculinity brought out something primal within her. In his arms, she felt like the Amazon warrior she'd once pretended to be as a little girl.

Anson is a fierce Dragon King, a dragon shapeshifter born and bred to protect his own. But when a rogue tech company hacks into their world, he must join forces with the unlikeliest of allies: a human female. Her name is Devon Abrams. A rising star at the firm, she has no idea that her boss is in league with the sinister Fae and their secret war against humanity. If Anson gains her trust, he can defeat the enemy from within. But first he must fight his own attraction--to this exquisitely beautiful mortal...

Devon loves her job at the firm. But sometimes she wishes she could find a man--a real man--who isn't threatened by her success. When she first meets Anson, she's overwhelmed by his powerful masculine presence and disarmingly gorgeous smile. But when he reveals his true mission--and his ability to transform into a dragon--she's irresistibly drawn into an epic battle between humans and immortals, magic and technology, danger and desire. Anson vows to protect her from the Fae. But can he control the flames of passion that blaze within his heart, in Blaze, the next sexy Dragon romance in the Dark Kings series from New York Times bestselling author Donna Grant.

The timeline in Blaze overlaps some with Paris and Dmitri’s stories so Anson really does not know what has happened with those two and their mates. We are in London with Anson, Esther and Kenzi investigating Kyvor. The company that somehow has a Druid that messed with Esther and Kenzi’s minds. They also totally invaded Kenzi’s life and privacy in trying to capture Ryder.

A lot of pieces are starting to come together in Blaze. The possibility that all may not be Ulrick’s doing, and that there is someone that is impersonating him starts to enter the equation for the Kings. Things are not going according to anyone’s plans anymore since Mikkel has discovered Ulrick’s secret and in turn Ulrick learns of Mikkel’s Druid. The odds are starting to look kind of scary as to just what Mikkel is going to be able to do to Ulrick. This Druid is scary as the Druids of MacCloud Castle will attest. She has powers that are unheard of.

Devon is a great, independent woman. Loving her job and dabbling in the dating world. She reads a hilarious dating blog that even shows up at the end of the book so I’m kind of curious as to who is actually behind the blog. It may have nothing to do with the Kings and their world, but she sounds like quite the character and I think she’d fit in nicely with the family at Draegan!

Devon doesn’t believe in the magic at first but quickly gets introduced and is forced to accept that the man she is interested in is a dragon. It takes her some thinking, but she gets so overwhelmed by all the other magic, she is can’t help but just deal and finds that she actually has fallen in love with Anson, even in his brown dragon form.

Anson is sick to death of the no-fly rule and hiding from the humans. I felt like he was dangerous to have out since he didn’t really want to to try too hard to hide his true form. Even in front of humans. When he is trapped his choices are limited and even though he is falling into Kyvor’s plans, he shifts. Much to Kyvor’s delight. But, Kyvor is acting on assurances of protection from Mikkel and the Druid. He doesn’t seem to be the most confident CEO at times.

I was really scared that Devon was going to get the same forced treatment from the Dark that Denae received. The Dark Fae really creep me out and their powers of seduction and death are just wrong. Even if the woman does not understand what is happening to her, it just really freaks me out. Devon needed protection from them at all costs.

Bringing in this Druid to the story is adding another enemy and more danger to this war. Blaze seemed to build up more towards the final war than the previous books but we are left with a LOT of questions. We still have the wooden horse. Mikkel and Ulrick as well as Tareath and Balladin also have issues to be resolved. The web is getting tighter and every little bit of information may be a tipping point to all the tension that is hanging in the air. Explosions are a hair trigger away and battles are coming sooner rather than later.

I’m so wrapped into this series now. I’m dying to know what is going to happen to all these threads we have open. OH and we seem to be getting SO close to knowing who Rhi’s King is! I thought for sure that nugget was going to be outted, only to be disappointed. So close! This is why I love this world. Not only do we have the main couple of the book, but there are so many threads building that I feel pulled completely pulled into the story trying to puzzle out what the next moves on the board will be.

Blaze did not disappoint and I’m thrilled with how intricate this overall war arc has become. Some things tying together while others are keeping me guessing. I love that Con got caught up on mating ceremonies in this book as I fear the mates are going to need their immortality soon. Con’s attitude towards the mates has improved greatly and he has finally accepted that the Kings need their mates. They have all become family and Con is enjoying the feeling of them all together as well. It’s nice that the Kings don’t have to worry about his disapproval. Not that they really cared once they found their mates!

We still have a few mates that are flying solo, and I’m not sure if we are going to see them mate before hell breaks loose on the Kings. We do have relationship issues that need addressed and I hope they resolve peacefully. So much is happening, I’m dying for the next book to be released already!