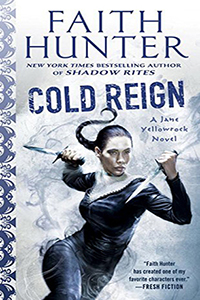 Jane Yellowrock is a shape-shifting skinwalker…and the woman rogue vampires fear most. Jane walks softly and carries a big stake to keep the peace in New Orleans, all part of her job as official enforcer to Leo Pellisier, Master of the City. But Leo’s reign is being threatened by a visit from a delegation of ancient European vampires seeking to expand their dominions.

But there’s another danger to the city. When she hears reports of revenant vampires, loose in NOLA and out for blood, Jane goes to put them down—and discovers there’s something unusual about these revenants. They never should have risen.

Jane must test her strength against a deadly, unnatural magic beyond human understanding, and a ruthless of cadre of near-immortals whose thirst for power knows no bounds…

Trainer and top mentor at PsyLED Spook School, Soul appears to be anywhere from 40-60 years old, the kind of woman who was ageless and sexy and sultry, and made all the men in visual distance perk up and think about taking her to the nearest hotel. She was once a ‘prisoner of time’. She has smooth olive skin and black, flashing eyes and platinum hair like storm clouds, the kind nature gives some formerly black-haired women. It hangs down her back in long, supple waves. She has curves in all the right places.

Her Species is one of les arcenciels or essendo luci. Is a direct descendant of the first shape changer on Earth. She smells blue with touches of rain.

“I am of the Light, what some have called arcenciel. Light-beings. Rainbow dragons. Humans have worshiped us and witches have imprisoned us and used us for their magics for eons of time. We have come and gone upon your Earth and others like it for millennia. We like it here. Were we not hunted, more of us would choose to stay here. To raise our hatchlings here. There is water aplenty and we like the water planets best.”

Also – her true form, the light dragon—arcenciel: Her jaw elongates. Alligator long. Crocodile long. Full of teeth like needles and knives but pearly. The alligator snout widens into a frilled head that is easily the size of a water buffalo. The whole buffalo. With slowly spiraling, multicolored hair. This arcenciel is massive. With a black tongue that flicks out and back in, again, touching/ tasting. Its eyes are huge, like iridescent glass dinner plates, orangey and bright. her teeth were than the previous arcenciel, her frill containing more white and red. Soul’s light pearlescent, her body winged, snaky, scaled. Soul is not the same person in this form, as if she loses her humanity when she sheds her human skin. As arcenciel she is light, brilliant as the dawning sun, like fireworks going off in the street, but silent.

But she can time-walk even better than Jane Yellowrock.

**Compiled by Melissa M. Gilbert of Clicking Keys, for the Character History of the Jane Yellowrock world**

There is a tour-wide giveaway going on with prizes of Cold Reign copies and totes featuring Beast! Both would be awesome to win! The giveaway is open to U.S. residents. There are only a couple of days left for the giveaway, so get your entries in fast!

Faith collects orchids and animal skulls, loves thunder storms, and writes. She likes to cook soup, bake homemade bread, garden, and run Class III whitewater rivers. She edits the occasional anthology and drinks a lot of tea. Some days she’s a lady. Some days she ain't.
For more, see www.faithhunter.net
To keep up with her, like her fan page at Facebook: https://www.facebook.com/official.faith.hunter