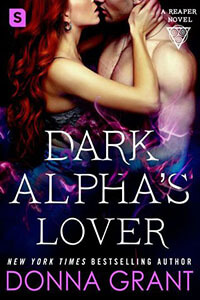 There is no escaping a Reaper. I am an elite assassin, part of a brotherhood that only answers to Death. And when Death says your time is up, I am coming for you…

I answer to no one but Death. I am impenetrable, impervious, immortal. I exist to do Death’s bidding and no one–not Reaper nor human nor Fae–can stand in my way. Except for the bewitching half-Fae, Catriona. She swears the magic in her family passed her by, but I know better. This woman is strong. This woman is powerful. And when her abilities surge forth, no one will be able to stop the Dark Fae from coming for her. Except for me. I want to keep her close. I want to keep her safe. I want lose myself to her, again and again…

Nothing was ever as it seemed.

There were more than humans walking this earth. The things seen out of the corner of your eye were real, even if your mind refused to recognize—or accept—them.

But Catriona Hayes knew of their existence, even if she wished she didn’t. They were Fae. Magical creatures that were so beautiful they seemed otherworldly—because they were.

The Fae had come to this world, seamlessly integrating themselves into the lives of mortals. But then again, when it came to beings with magic, they could do such things.

Cat blew out a breath and put the day’s earnings in the pouch before placing it inside the safe and shutting the door. She straightened and looked through the windows of the café and across the street to the pub alight with merriment.

There was a bit of wistfulness within her when she spotted three women walking into the bar with bright smiles. She’d never been that carefree.

From the first moment she could remember, her family had kept her apart from others. It wasn’t until she was older that she realized what made her so different—she was a Halfling.

Some might rejoice at the news, but she wasn’t most people.

The first time her grandfather had told her of her heritage, she’d laughed, thinking it was a jest. But as they’d walked down the streets of Galway, he began pointing out the Fae.

That was the day her life changed. At eight years old, she’d felt the weight of the world drop upon her shoulders. The burden had nearly brought her to her knees. And it had lingered, growing heavier with each passing year.

Yet she remained standing beneath it all. Only because of her grandfather. The man who smiled in the midst of the many storms life threw his way. He was what kept her composed and mindful of the dangers of living near Fae.

While she had been fearful of her grandfather’s revelation, her older siblings had embraced it as a gift.

Cat looked down at the counter and the top that covered it. Beneath the thick glass, next to the register, was a picture of her with her brother and sister twenty years ago.

Whatever gift having Fae blood had given her siblings had been taken away in a cruel twist of Fate several months ago when they were savagely killed.

Her brother had been murdered in a crowded pub, while her sister had had her life snuffed out on a train to London. No one had seen either attack. One moment, her siblings had been alive. The next, they were dead. It was how Cat knew the Fae were responsible.

Only beings with magic and the ability to veil themselves could have committed such crimes without a single person catching something on their mobile phones.

Ever since her family’s deaths, she’d been waiting for the Fae to come for her.

What was taking them so long? She and her grandfather—who she kept locked safely away in his cottage where no Fae could enter—were the only ones left.

A flash of lightning pulled her from her thoughts and reminded her that she needed to get home. She started toward the front, turning off the lights as she went. Flipping the sign in the café window to CLOSED, she walked out the door and locked it.

When she faced the street once more, she gripped the handle of her purse and looked around at the people. She knew the Fae could use glamour to disguise themselves, though most preferred to remain beautiful. That made it easier to pick them out, but it did nothing to lessen Cat’s dread.

She remained in the doorway as a couple walked past her. The man said something to make the woman laugh. Cat’s heart caught because she couldn’t remember the last time she’d giggled like that—never mind actually being on a date.

Cat squared her shoulders and turned to the left. Her cottage was toward the outskirts of Galway. She couldn’t wait to get home where she could relax.

There was no such thing for her. While others brushed their cares away with a pint of ale and loud music, she would eat alone at her house and sleep with one eye open.

Being half-Fae had done nothing but make her life miserable. She’d gotten nothing else from it. Her sister, Nora, had been able to move objects with her mind. Her brother, Domhnall, could grow plants.

For some strange reason, magic had passed her over altogether. No matter how hard she tried, there didn’t seem to be a smidgen of magic within her.

Countless times, she’d asked her grandfather what she’d done to not have magic. He’d never quite answered her. In his usual way, he would tell a story about all the Halflings who lived without magic.

But she always suspected that he was keeping something from her.

No amount of conniving or posing the question different ways ever gave her another answer, though. With every year that passed, she was more and more sure that her grandfather was hiding something.

Cat tensed when she walked past a Fae talking to a mortal female. His silver eyes, black hair, and sex appeal were the biggest clues to what he was—Light Fae. At least, it wasn’t a Dark.

The Dark scared her the most with their red eyes. She shuddered just thinking about them.

She turned the corner and quickened her pace. Thunder rumbled the same time lightning zigzagged across the sky. More rain was on the way, but if she were lucky, she’d make it back to her cottage before it came.

Suddenly, she stopped. She didn’t know what had caught her attention, but something told her to go no farther. Her gaze roamed down the street as people milled about.

There was something in the air that draped over everything like a wet blanket. It took her a moment to realize what it was—fear. She looked at the humans and saw that none of them appeared to be affected.

Then she heard the footsteps coming, quickly. She saw the man running toward her and looking back over his shoulder. He passed beneath a streetlamp, and she saw his eyes—red.

But it was the terror on his face that surprised her. She hadn’t thought there was anything a Dark feared, but whatever was after this particular Fae must be frightening.

Her head told her to run, but her body refused to move. She remained where she was, even as a man appeared out of thin air in front of the Dark.

The Fae slid to a halt, his eyes wide. The man before him had long, white hair that was pulled away from his face by three small braids on each side of his head.

She had little time to process that before she saw the light glint off a blade. The sword sliced through the air and cut down the Dark, turning him to dust in an instant.

Shock reverberated through her as she involuntarily took a step back. What kind of weapon did he have that could kill a Fae?

Because she wanted one.

He took two steps away before he suddenly halted, his body stiffening. Then he gradually turned his head to look right at her. She couldn’t make out his face because of the shadows, but she knew he’d seen her.

And then, he disappeared.

She took another step back and hastily looked around, but there was no other sign of the white-haired man. Yet she knew she wasn’t alone.

He was there. She was sure of it. Just as she was sure the Fae would come for her soon.

Somehow, she managed to stand her ground. If she were going to die, she would do it with courage. Even if she was shaking. She wasn’t going to run, no matter how much she wanted to.

She felt something behind her a moment before the sound of footsteps reached her. Cat whirled around, ready to face the unknown stranger. But it was a Dark Fae who walked toward her.
“Shite,” she murmured and turned back around.

She walked faster and said over her shoulder, “Long day.”

She waited for him to say more, and when he didn’t, she gave a sigh of relief. It wasn’t until she was in her cottage that she slumped against the door.

Copyright © 2017 by Donna Grant and reprinted by permission of Swerve.