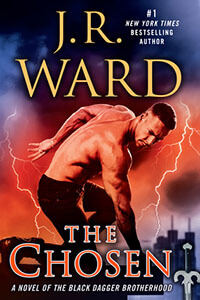 Xcor, leader of the Band of Bastards, convicted of treason against the Blind King, is facing a brutal interrogation and torturous death at the hands of the Black Dagger Brotherhood. Yet after a life marked by cruelty and evil deeds, he accepts his soldier’s fate, his sole regret the loss of a sacred female who was never his: the Chosen Layla.

Layla alone knows the truth that will save Xcor’s life. But revealing his sacrifice and his hidden heritage will expose them both and destroy everything Layla holds dear—even her role of mother to her precious young. Torn between love and loyalty, she must summon the courage to stand up against the only family she has for the only man she will ever love. Yet even if Xcor is somehow granted a reprieve, he and Layla would have to confront a graver challenge: bridging the chasm that divides their worlds without paving the way for a future of even greater war, desolation, and death.

As a dangerous old enemy returns to Caldwell, and the identity of a new deity is revealed, nothing is certain or safe in the world of the Black Dagger Brotherhood, not even true love . . . or destinies that have long seemed set in stone.

Ok, is it just me, or did that last sentence of the blurb just send a shiver of panic through you? What does that mean?? Everyone has to stay together and whole and happy! Ok, now that I have tamped down the fear a bit, some more about The Chosen.

This is going to be Xcor & Layla’s story. I’ve never been a true fan of Xcor and have actually been pretty pissed at Layla for her betrayal of Wrath and the BDB. Anywho, I am pretty sure this is going to be one hell of an emotional book. The obstacles these two face, including Xcor’s fate after his act of treason, mean I’m going to be prepared for some ups and downs. Hopefully no tears, just lots of feels. AND! Who is our new diety going to be? THAT is going to be interesting!

The Black Dagger Brotherhood books are always a mix of different points of view and situations. Just in this blurb we see three we are going to face. I hope there are not too many more, although I can tell you there are some characters I’m wanting to know about even if they are not in the main storylines.

Of course, as usual, I’ve bought the virtual signed copy of The Chosen. I’m addicted. I can’t help it. I already have the tracking information, even though they say it won’t work until release day. If you missed out, signed copies are being sold at your regular book retailers. That is, if you are like me and have an obsession with author signed books. Even if you don’t, you’ll want to get The Chosen preordered so you can start reading right on release day, April 4, 2017! I’m excited! Preparing myself for an emotional ride!

Quotes ~ The Shadows by J.R. Ward

Waiting on Wednesday ~ Ever Night by Gena Showalter