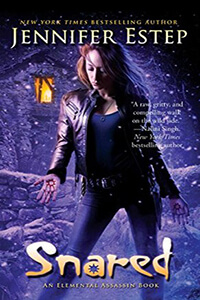 There is one thing this is guaranteed in the Elemental Assassin series. That is action and food! This series is so exciting that at times you are holding your breath while other times, you are wiping the drool off your chin as she whips up BBQ for the gang. It is non-stop and that is what makes Snared such an anticipated book for me. We are at kind of a turning point where we have a new set of bad guys and instead of Gin being on the defensive, she’s ready to take on this hidden group. But, it wouldn’t be an Elemental Assassin book without trouble and a twist in the midst. You’ve got a bit of time to catch up on the series, but with the excitement and intrigue, you’ll speed through those in no time. You got to be ready for April 25, 2017 when Snared releases! I’m more than ready for it!