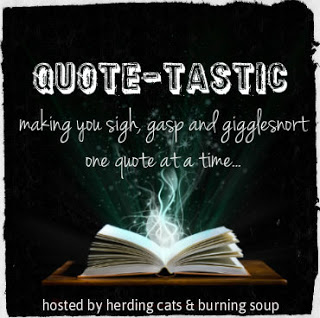 Anna over at Herding Cats & Burning Soup hosts this awesome meme on Mondays called Quote-tastic, where we can share some great passages from our reads.  Don’t forget to say what book it’s from so we can all check out your selection.  Anyone can join in, if you don’t have a blog, you can show me your quote in the comments!

Today, I’m grabbing a quote from Seventh Grave and No Body by Darynda Jones.  It is so hard to choose a quote from a book I am listening to in audio, but luckily I have this one in hard cover too.

“What’s up, sweet cheeks?” Oh yeah, Neil knew.  He was being way too nice.  We’d gone to high school together, and the only time he was nice to me was when he wanted to date my sister, Gemma.

“Well, for starters, Reyes and I are affianced.  And we have a bun in the oven.  Her name is Beep.”

“That’s not a name you hear every day.”

~Seventh Grave and No Body page 159

Charley likes to name everything, and it seemed funny to me that she names all the other things in her life with regular people names (Barbara for her brain, George for Reyes’s shower) but her own little bun gets “Beep”?  She is just full of surprises! 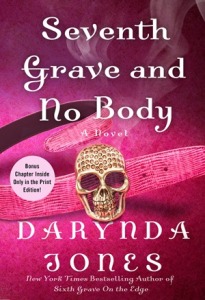 Quotes ~ The One You Want by Gena Showalter