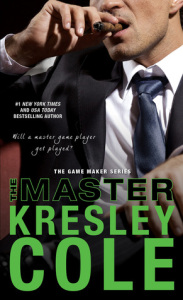 Everyone fears the Master…

Catarina Marín was a well-off young wife until her world fell apart. Now she’s hiding out, forced to start working as an escort in Miami. Her very first client is beyond gorgeous, but when he tells her what he plans to do to her, Cat almost walks out of the door.

If pleasure is a game, play to win.

After their mind-blowing encounter burns out of control, the lovers crave more. If they escape the deadly threats surrounding them, can Maksim overcome his past—to offer Cat his future? Only then will she tempt him with what he really wants: her, all tied up with a bow.

So The Professional was released in parts and that is how I read it. I really wish I had of waited until the total book was released as I think I would have appreciated it more. There were such big time gaps for me between the parts. I am SO glad that The Master is coming out all at once, in one book. I thought for sure we were going to see Natalie’s friend in this one, so I was surprised to find out it was Aleksei’s brother, Maksimilian. I was pretty intrigued with him in The Professional, so I’m excited to learn more about him in this book. The Master releases January 27, 2015.

Waiting on Wednesday ~ Ever Night by Gena Showalter