Life of a Blogger is a weekly feature hosted by Novel Heartbeat on Thursdays.  Each week has a new topic where we can all get to know each other on a more personal level.  Join in and let’s have some fun! 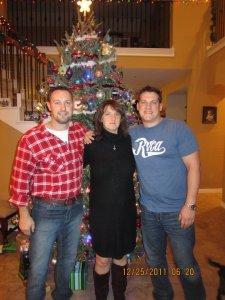 This is my two brothers and I a few years ago now. The one on the left is Adam and he is about 2 years younger than me (see I’m not revealing my age!), and on the right is Ben who is around 4 years younger. I’m the oldest. We all live within an hours drive each other and regularly do family things at my parent’s house.

Adam has been married for about 13 years now to his beautiful wife Angie and they have 7 kids. Still blows my mind. I don’t know how they deal. The kids are involved in a lot of sports so Adam & his wife are on the go a lot. Once again, it blows my mind! LOL Adam is a sports lover and sometimes coaches his son’s teams. He also really enjoys hanging out with his friends and playing poker.

Ben has one son and him and his girlfriend, Alicia, just bought a new house. A little farther away than I would have liked, but it’s closer to my nephew’s mom so I guess that it is helpful for him. Ben is a big UFC fan, but he also enjoys other sports. The lucky shit has been to a few of the fights live. Can ya tell I’m jealous? I have to give Ben a big shout-out as he stayed at my house and looked after all my animals while we were in New Orleans. My Ernie treated him like crap and gave him a really hard time. I’m so embarrassed! But I came home and Ernie hadn’t been taken to the pound, so I’m really thankful to Ben for putting up with him.

We’ve all had some crazy times, but we work past them. My brothers are smart and all around great men! I love you guys!