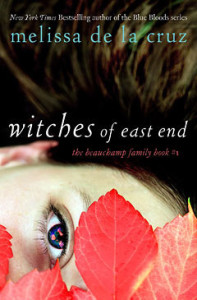 The three Beauchamp women--Joanna and her daughters Freya and Ingrid--live in North Hampton, out on the tip of Long Island. Their beautiful, mist-shrouded town seems almost stuck in time, and all three women lead seemingly quiet, uneventful existences. But they are harboring a mighty secret--they are powerful witches banned from using their magic. Joanna can resurrect people from the dead and heal the most serious of injuries. Ingrid, her bookish daughter, has the ability to predict the future and weave knots that can solve anything from infertility to infidelity. And finally, there's Freya, the wild child, who has a charm or a potion that can cure most any heartache.

For centuries, all three women have been forced to suppress their abilities. But then Freya, who is about to get married to the wealthy and mysterious Bran Gardiner, finds that her increasingly complicated romantic life makes it more difficult than ever to hide her secret. Soon Ingrid and Joanna confront similar dilemmas, and the Beauchamp women realize they can no longer conceal their true selves. They unearth their wands from the attic, dust off their broomsticks, and begin casting spells on the townspeople. It all seems like a bit of good-natured, innocent magic, but then mysterious, violent attacks begin to plague the town. When a young girl disappears over the Fourth of July weekend, they realize it's time to uncover who and what dark forces are working against them.

I’m going to have a hard time reviewing the book considering I am already watching the series. It is possible I will get the two mish-mashed. The show is not “great” but it is not horrible either. I think one of the main reasons I enjoy it is because I’ve read the book.

One major difference between the book and the show is that Freya and Ingrid do know they are witches and their powers are contained by the council. For many, many years they have been hiding in the shadows, trying to be normal, but just one little unpunished twinge of magic turns into a joyful reunion of the old ways. This turnaround surprised me. I thought they would try to be a little more discreet with their powers instead of putting it all out there for the town to see.

Freya, a bartender at the local bar, can whip you up a great love potion. She even creates her own menu of “drinks”. Her main problem is her infatuation with her soon-to-be brother-in-law. She is pulled to him, and her fiance is gone a lot, apparently saving the world. Freya is a really fun character despite the angst she has during the book.

My favorite character was Ingrid. She has the perfect job. She is a librarian in a gorgeous old library. Wait, I think I’m thinking of the library in the show which is absolutely amazing. Ingrid’s power brings many visitors to her library in hopes of having their problems solved.

It takes some special magic and knowledge for Joanna, Freya and Ingrid to put together the pieces of the oddities and violence that has taken over their town. Joanna, Freya and Ingrid do not appear to be particularly close throughout the book, but when it matters, they close ranks. Witches of East End did not pull too much of an emotional response or attachment from me on any of the characters, they were just sort of “there”, and things just rolled along with a fairly low-key climax. I did enjoy the story, and it definitely made me want to read more witch stories, it just didn’t pull me in or excite me the way I was hoping.