A cop's craving to know more about the woman next door could prove fatal in the steamy new novel from New York Times bestselling author Lori Foster.

As the person responsible for taking down a brutal human trafficker, Alice Appleton fears retaliation at every turn. No one knows about her past, which is exactly how she prefers it...until the sexy cop next door comes knocking.

Detective Reese Bareden thinks he knows what makes women tick, but his ever-elusive neighbor keeps him guessing like no other. Is his goal to unmask Alice's secrets? Or protect her from a dangerous new threat? One thing is certain: their chemistry is a time bomb waiting to explode. And with no one to trust but each other, Reese and Alice are soon drawn into a deadly maze of corruption, intrigue and desire-and into the line of fire....

Bare It All by Lori Foster is the second in the Love Undercover series. Despite me being a total paranormal junkie, I’m reading this romantic suspense because my book club has assigned Getting Rowdy, book 3, and I have to read the first two before I get there. Call it OCD, call it the crazies, whatever, I have to read the series from the start. I’m kind of glad I did, and for this series, I think I would recommend it. The characters from the first book are seen pretty frequently and you might feel a tad out of the loop if you haven’t already met them.

Bare It All picks right up from where Run the Risk ended. Due to his apartment being a crime scene, Reese is camping out on his pet sitter’s couch. Not the sleeping arrangement he would prefer though. Reese has been trying to edge his way into Alice’s life since he first met her and finally broke the ice when he brought home a stray dog that needed care when he was not home. Then Alice helped out during Run the Risk, so slowly Reese is getting to know her. She has a past that she is trying to hide, and has Reese concerned when he sees how armed she is.

The action really picks up when Alice plays rescuer to a young girl involved in a human trafficking group. Luckily, Reese has asked Rowdy to keep an eye on Alice so her actions are reported to the appropriate people and the case begins. The head of the trafficking group is none too happy to have one of his girls taken from him so he is out for revenge. Alice will need to start revealing her past to Reese to protect herself and help solve the case.

Reese has many layers. He is compassionate and caring, but is strong and hard when it comes to his job and protecting Alice. At first I thought he was going to be this straight-laced, do-gooder guy and I wasn’t real keen on that, but then his protectiveness toward Alice and his determination to catch and stop the bad guys won me over. I was a little upset at his approach to finding out info from Alice. He really put Alice in a bad position, but she got her revenge, which was fun and more than made up for how mad he had made me.

I found Alice timid and withdrawn, which is probably what the author was portraying her to be like, but that is just not my favorite kind of character. However, the deeper into the story, and Alice’s past, the more you see what a tough chick she really is. Alice can take care of herself, as she proves with her arsenal and wit. She is also very caring and nurturing which is what attracted the dog I think, which in turn attracted Reese. Alice still seemed a bit, I don’t know, out of touch with regular life. How to approach Reese, how to talk to him etc. This is where Rowdy comes in. He befriends Alice and tries to help her navigate her relationship and just be herself. Rowdy is pretty good at making a sexy, smart ass out of Alice. Well, Rowdy is good at quite a few things actually ;).

Overall, I found this book very hard to put down. The suspense was fast-paced pulled everyone together to apprehend the bad guys. The romance had a good mix of conflict so it wasn’t just one of those “fall head over heels and everything is rosy”. The character’s personalities are all building up and I found I like Pepper much better this book, and that’s saying something. I will definitely be continuing on with this series!

Lori Foster first published with Harlequin in January 1996. Her second book launched Temptation Blaze and her 25th book launched Temptation Heat. Since those early days, Lori has routinely had 6 to 10 releases a year. She’s a Waldenbooks, USA Today, Publisher’s Weekly and New York Times bestselling author with over 50 titles published through a variety of houses, including Berkley/Jove, Kensington, St. Martins, Harlequin and Silhouette.

Lori Foster first published with Harlequin in January 1996. Her second book launched Temptation Blaze and her 25th book launched Temptation Heat. Since those early days, Lori has routinely had 6 to 10 releases a year. She’s a Waldenbooks, USA Today, Publisher’s Weekly and New York Times bestselling author with over 50 titles published through a variety of houses, including Berkley/Jove, Kensington, St. Martins, Harlequin and Silhouette. 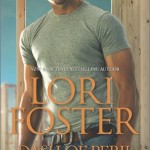