Posted September 4, 2013 by Tanya in Waiting on Wednesday / 2 Comments 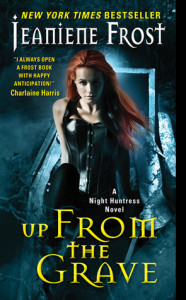 Lately, life has been unnaturally calm for vampires Cat Crawfield and her husband Bones. They should have known better than to relax their guard, because a shocking revelation sends them back into action to stop an all-out war…

A rogue CIA agent is involved in horrifying secret activities that threaten to raise tensions between humans and the undead to dangerous heights. Now Cat and Bones are in a race against time to save their friends from a fate worse than death…because the more secrets they unravel, the deadlier the consequences. And if they fail, their lives—and those of everyone they hold dear— will be hovering on the edge of the grave.

Ok, so hands y’all, who is sad that this is the last Night Huntress book we get? I was in complete shock when I read this post on Jeaniene Frost’s blog. It makes my hands itch to get ahold of it, but on the other hand, I’m dreading it. Can I actually be dreading saying “goodbye” to fictional characters? I think that since things are all wrapping up in Up From the Grave, that it will be the best yet!