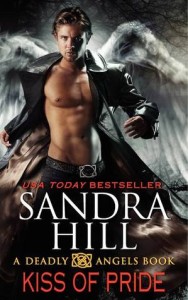 SOME MEN ARE TOO BAD TO BE TRUE...

Is he really a Viking with a vampire’s bite? An angel with the body of a thunder god? A lone wolf with love on his mind? Alexandra Kelly, his prey, thinks Vikar Sigurdsson is either flat-out crazy or he’s trying to maneuver her into his bed--which is hardly where a professional reporter should conduct an interview, tempting as that prospect might be.

SOME MEN ARE TOO GOOD TO BE TRUE...

Until Vikar does something a teensy bit unexpected, and Alex begins to wonder whether her mystery man could really be everything he says he is: a Viking Vampire Angel on a thousand-year-long mission with his pack of sinful brothers—and a man who’s finally found the woman of his dreams. By then, Vikar is already wrapping his chiseled arms around Alex’s body...and sinking his wicked fangs right into her neck. If this is sin, why does it feel so good?

Kiss of Pride held a lot of supernatural elements that I just didn’t click with.  The whole backstory of how the Vikings pissed off God and have been sentenced to protecting the world from evil led by the Archangel Michael was too easy.  Another thing that was too easy was how their abilities and situation was accepted by Alex.  Especially a reporter, you think she would be all over investigating the whole thing, instead she pretty much sits back and lets it all happen around her.

There was action to the story, and it displayed the devotion the Vikings all have for each other, which was really good to see.  They are a tight group.  I also enjoyed the relationship between Alex and Vikar despite how quickly the relationship developed.  Vikar’s vulnerability was sweet.

Kiss of Pride also had some good, humorous moments between the Vikings which I did enjoy.  The book overall did not pull me in and make me connect with it, which disappointed me.  It is possible the next book will pull me in a little more, when we don’t have new world building, enemy action and relationship building all at once.