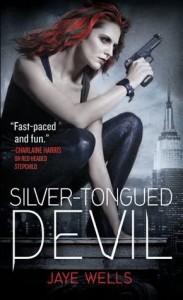 Goodread’s Synopsis ~ Now that the threat of war has passed, Sabina Kane is ready to focus on the future. Her relationship with Adam Lazarus is getting stronger and she’s helping her sister, Maisie, overcome the trauma of her captivity in New Orleans. Even Giguhl is managing to stay out of trouble thanks to the arrival of Pussy Willow and his new roller derby team. But as much as Sabina wants to feel hopeful about the future, part of her doesn’t trust that peace is possible.

Her suspicions are confirmed when a string of sadistic murders threaten to stall treaty negotiations between the mages and the vampires. Sabina pitches in to find the killer, but her investigation soon leads her down dark paths that have her questioning everyone she thought she could trust. And the closer she gets to the killer, the more Sabina begins to suspect this is one foe she may not be able to kill.

Just when we thought Sabina and the gang were going to get a breather, everything starts to fall apart again. A peace treaty between the races is in the works and is just SO close to coming to fruition, but dead bodies start to make an appearance and that puts the treaty in jeopardy. It will be up to Sabina and the gang to find the killer before everything falls apart.

As I have said in all my other reviews of the books in this series, Giguhl is awesome! A roller derby team? How fun would that be to watch. All those supernaturals racing around the track trying to knock each other senseless.

Silver-Tongued Devil had some relationship revelations that had more than one couple on the outs. Things just sometimes are too hard to get over. There is also the relationship between Sabina and Maisie. Maisie has been severely affected by the events in New Orleans, and really needs some professional help. She will never be the same but the gang needs to get her as close to normal as they can so that she can make her predictions at the peace treaty signing.

Silver-Tongued Devil is once again a fast-paced book that contains more than a few “oh shit” moments. Sabina continues to grow stronger and stronger in each book, she just needs help reigning in and focusing those powers to her will. This is an awesome series and do not miss this installment!