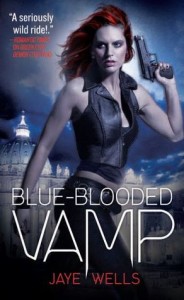 Sabina Kane is on the hunt. Her prey: Cain, the father of the vampire race and the one who murdered her family and her friends. Unfortunately, Cain is hunting Sabina, too. The one man who holds the key to defeating Cain is, of course, Abel. A mage with secrets to spare and, hopefully, the power to match it. Unfortunately, for Sabina, he’s in Rome and may not want to be found.

Sabina sets out for Italy with her friends, Giguhl and Adam Lazarus, to track down the only man who can get her the revenge she hungers for. But will he help her or oppose her? And just who is Abel, really? Worst of all, when Sabina figures out the goddess Lilith has a plan for her-she realizes this trip is getting deadlier by the minute.

As they say: when in Rome-SURVIVE.

This read was a round up of who’s who in Sabina world.  There is an appearance by just about all the previous characters and all their storylines are tied up in nice little bows.  The building to the big finale was fast paced and full of revelations for everyone.  I still felt that Sabina took too much responsibility for things that were beyond her control and was very self-blaming, but I feel she pretty much gets over it with the help of Adam and Giguhl.  It is hard to review this one, as there were just so many surprises.  Just know that Jaye does a very good job of bringing it all together at the end.  I think she left it open enough that we could see maybe some shorts come out of the world, but the over all story arc has come to it’s end.  I will miss Giguhl so I hope he gets a novella!

Thanks for a great series Ms. Wells and I can’t wait to take in your new ventures.  Good luck!