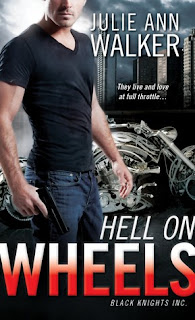 Black Knights Inc.–Behind the facade of their tricked-out motorcycle shop is an elite special ops team assigned the jobs too hot for anyone else to handle.

Ex-Marine Nate “Ghost” Weller is an expert at keeping his cool–and his distance–which makes him one hell of a sniper. It’s also how he keeps his feelings for Ali Morgan in check. Sweet, sexy Ali has always revved his engine, but she’s his best friend’s baby sister…and totally off limits.

Ali’s never seen anything sexier than Nate Weller straddling his custom Harley–or the flash of danger in his eyes when she tells him she’s in trouble. First something happened to her brother, and now she’s become the target of a nasty international organization. With Nate, her life is in the most capable hands possible–but her heart is another story altogether.

Hell on Wheels by Julie Ann Walker was a book club selection.  I used Amazon’s amazing Whispersync to gobble up this action-packed book.

Nate “Ghost” Weller is one tough dude.  He has gone through some pretty intense situations that have made him build some very thick walls around his emotions.  He needs someone with a lot of patience to work him out of that shell.  He’s definitely someone you would want on your side in a fight.  All those muscles on a custom bike… yeah I can deal with that.

Ali, I just didn’t think was the right fit.  To me, she seemed too sweet and just totally opposite of Nate.  I like my heroine’s to have their own tough streak.  We could see a bit of tough and determination in her, but it wasn’t enough for me to count her as someone who could really fight for herself.  I like the hard ass women who aren’t afraid to let the cuss words fly and really dig in their heels and tear a strip off anyone who tries to stand between her and what she wants.  Ali just didn’t cut it for me.

I have heard a lot of good reviews about the series, so I am going to give the next one a try.  It features Rebecca and she is a badass heroine so I think I will like it better.

One word of warning.  Read the e-book or paperback for this one.  I think the audio had a lot to do with how I felt about this book, despite me trying to keep it separate.

So, I’m going to rate this one as a 3 out of 5.  Good enough to continue on and give the series some room to sweep me off my feet.  This was read for book club and will count as my Audio 2013 Challenge as well as my E-book 2013 Challenge.