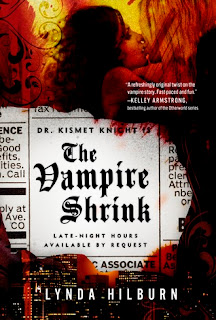 A sizzlingly sexy urban fantasy sure to feed the hunger of ravenous, vampire-loving fans.

Kismet Knight, a brainy Denver-based psychologist with a stalled career and a nonexistent love life, is about to have her world rocked. Not only does her newest patient, Midnight, long to become a vampire, but the teenager insists that a coven of the undead hangs out at a local goth club. The always-rational Kismet dismisses Midnight’s claims as the delusions of an attention-starved girl–until bodies start turning up drained of blood and the hottest self-proclaimed vampire ever to walk the face of the earth enters her office.

What’s real? What’s not? As inexplicable events and romantic opportunities pile up, along with the corpses, Kismet finds herself in a whirlwind of passion, mystery, and danger. But this tough and funny heroine–who doesn’t do damsel in distress–is about to turn the vampire-meets-girl convention on its head.

I read/listened to The Vampire Shrink as a book club read.  I normally love vampire books, but I had a hard time with this one.  I just couldn’t connect with the heroine.  I was getting really tired of her telling herself she was out of her mind.  It got old.  Also, I am used to visualizing my hero’s as being big, muscular fighters and I did not get a sense of Dev being that way.  I saw him as tall, and thin, but not the big fighter type.  My big turn off was the love triangle.  I do NOT like them at all.  Just pick one already, don’t leave the relationships open ended like that.  Drives me crazy.

The story itself was pretty good.  Kismet found herself in some pretty eye-opening situations that at times had me laughing.  I cannot get one dance scene out of my mind!  I liked the demon character’s state of mind, definitely someone who could use Kismet’s help!

I am conflicted on whether I will read the rest of the series, I am terribly OCD about reading all of a series, especially if I’ve only read the first one.  Hopefully anyone who has read this series can let me know if it is worth going on.  I am going to give The Vampire Shrink three stars for the laughs I got.  This is an addition to my 2013 Audio Book Challenge and my 2013 EBook Challenge. 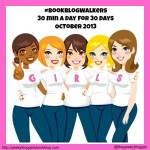