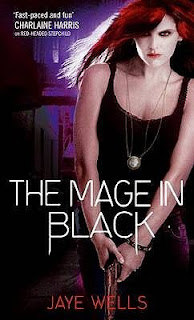 Sabina Kane doesn’t have the best track record when it comes to family. After all, her own grandmother, the leader of the vampire race, just tried to kill her. When she arrives in New York to meet the mage side of her family, the reunion takes the fun out of dysfunctional.

On top of that, the Hekate Council wants to use her as a pawn in the brewing war against the vampires. Her mission will take her into the bowels of New York’s Black Light district, entangles her in mage politics, and challenges her beliefs about the race she was raised to distrust. And Sabina thought vampires were bloodthirsty.

We have seen how bad one side of Sabina’s family is, now we get to see the Mage side.  This is a whole different world for Sabina, all these Mages with all their unfamiliar abilities.

It is hard for Sabina to be in this vulnerable position, not knowing and having to trust the people around her.  At least there is Giguyl.  I love that demon!  He is such a hilarious character and it is fun to see how much of a role he plays in this book.

Sabina runs into an old acquaintance, and even though he will possibly give Adam a challenge, I can’t help but like him.  I think it is the “bad boy” in him.

I really enjoyed The Mage in Black.  The vulnerable position that Sabina is in makes me feel for her and really just want to be there for her.  I loved Maisie, she is sweet and funny, just a great character.  The action was great and the book ended with a great segue into Green-Eyed Demon.

I recommend this whole series and give this individual book a 4 stars for it’s action and emotional pull.  This is an addition to my 2013 EBook Challenge 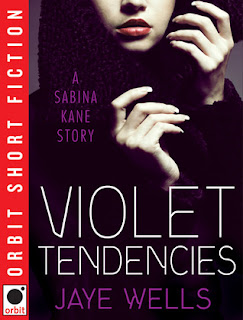 Former assassin Sabina Kane heads to Los Angeles to find her kidnapped sister. Helping her on the mission are her hot mage partner, her Mischief demon minion, and a Vanity demon named Valva. The problem? She’s got to figure out how to find her sister without letting her enemies know she’s back in town. But when Sabina seeks out an old ally — a vampire strip club owner named Fang — for help, Sabina learns the hard way that Vanity demons don’t know the meaning of the phrase “low profile.”

This was a quick, fun novella read.  It does contain some story that will explain a character in the next book.  It is not a story changing piece of information, but will help you understand a character’s state of mind.  This novella also sets the scene for Green-Eyed Demon.  I enjoyed it and the main action in the story is absolutely hilarious.  For readers of this series, I would definitely recommend this novella, it was fun!  This is an addition to my 2013 EBook Challenge.