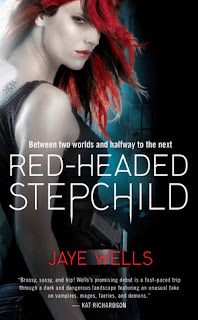 In a world where being of mixed-blood is a major liability, Sabina Kane has the only profession fit for an outcast: assassin. But, her latest mission threatens the fragile peace between the vampire and mage races and Sabina must scramble to figure out which side she’s on. She’s never brought her work home with her—until now.

I have been wanting to read this book for some time now.  It’s been on my TBR list since… well I think Amazon had the kindle version for free at one time. I had heard a lot of really good things about Jaye Wells and her Sabina Kane series, so was anxious to try it.  Then I actually met Jaye Wells at Reader’s ‘n Rita’s last November and I moved the books up the TBR list.  I have all but one signed now, but I will still get them on my kindle so I will have them on there too.

I absolutely despise Lavinia.  I can’t stand it when people treat others that are trying so hard like crap.  Grandma’s ending to the story actually pissed me off, but I won’t say…na na na.

Gighul was so funny, I loved his scenes.  He kind of reminded me of Jenks from the Kim Harrison Hollows series.  The kind of character that could easily keep me laughing with his quips all day long.

Adam sounds soooo sexy and Red-Headed Stepchild isn’t a fall in love instantly type of book.  I really hope Sabina and Adam really build on that relationship and it becomes something.

Jaye Wells is certainly building a very interesting world that made me both laugh and cry (and I don’t cry very often).  I will note it was a quick cry.  I don’t want to discourage those that won’t read books that make them cry.  There were great fight scenes.  I really liked how they were written.

So, my friends, I encourage you all to read Red-Headed Stepchild and the rest of the series after that.  The series has been written all the way to the end, so no cliffhangers you have to wait a year for!  I’m torn between a 4 and 4.5 on this one.  So, I will just say READ IT, it’s AWESOME!