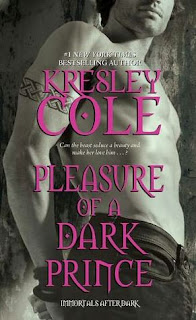 Lucia the Huntress: as mysterious as she is exquisite, she harbors secrets that threaten to destroy her—and those she loves.

Garreth MacRieve, Prince of the Lykae: the brutal Highland warrior who burns to finally claim this maddeningly sensual creature as his own.

That lead to a pleasure so wicked…

From the shadows, Garreth has long watched over Lucia. Now, the only way to keep the proud huntress safe from harm is to convince her to accept him as her guardian. To do this, Garreth will ruthlessly exploit Lucia’s greatest weakness—her wanton desire for him.

So we have Lucia the Huntress in this installment of the Immortals After Dark. Don’t get me wrong, I like Lucia, but she is not my favorite Valkrie. All the other Valkries seem so lighthearted and carefree, but Lucia doesn’t seem as fun-loving. She is more serious I guess would be the way to put it. Lucia has a past that will soon come to claim her, as well as the rest of the world, unless she takes care of that past.

Garreth is everything my dream werewolf is, hot, possessive, stubborn (well stubborn could be good or bad) and relentless. He will pursue his mate as far and as long as she makes him. And boy, does she make him!

Lucia is following directions given to her by Nix, who never gives reasons or predicts outcomes, but Nix knows Lucia’s werewolf will be right behind Lucia to keep her safe. They are on a mission that takes them into places few have dared, and to a place that Garreth himself swore he would never go again. I thought that the mission and adventure overshadowed the romance in this book. Which is good because it was exciting. I am starting to realize something though. Everything that happens in the IAD series is part of a bigger plan. I feel kind of stupid because I should have realized sooner that even little pieces of information from each book are going to catch up to me. Now that I am getting closer to the end of the published-so-far books, I’m wishing I had of paid more attention to all the other things that were going on. That pesky little sentence that is in every book when describing the Accession “happens every 500 years… or now”, that should be my warning that all the little tidbits are going to come together to make one giant party. Maybe I will go back a few books and reread them. I’m always missing something.

Oh! Garreth gets Lucia the most awesome gift! I was almost as excited as she was!

So I’m giving Pleasure of a Dark Prince 4 stars. I was thinking 3.5 because the romance wasn’t as hyped up as usual, or maybe it just didn’t stick with me as well as some of the action scenes in the book, but ultimately I decided the action (and scary creatures) made up for it.