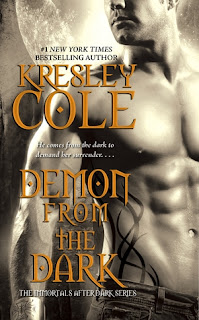 A dangerous demon she can’t resist…

Malkom Slaine: tormented by his sordid past and racked by vampiric hungers, he’s pushed to the brink by the green-eyed beauty under his guard.

A maddening witch he aches to claim…

Carrow Graie: hiding her own sorrows, she lives only for the next party or prank. Until she meets a tortured warrior worth saving.

Trapped together in a savage prison…

In order for Malkom and Carrow to survive, he must unleash both the demon and vampire inside him. When Malkom becomes the nightmare his own people feared, will he lose the woman he craves body and soul?

I really wanted to like Carrow, she’s one of Regin’s closest party friends, and I love, love Regin.  She is going to take on a responsibility that is going to cut into that party hard life, and also is going to make her do something that could ruin the rest of her life.

My heart breaks for Malkom.  His whole life has been one large tragedy and has condemned himself to a long, lonely life.  Finally something truly amazing has dropped right into his lap and he will do anything to keep it.

I fell in love with Malkom, the strong, tragic hero and the task that Carrow has been given, well I just can’t believe she can do it.  She has to find some way to accomplish what she’s been sent to do without totally betraying this man.  Carrow is caught in between two very important people and is going to have to make a sacrifice.  I do not envy her the position she is in.  Sometimes I down right hated her even though I know she was doing what she HAD to.

I also have to mention that the events leading up to the Accession are heating up so all the major players need to be setting up in their positions.  Near the ending of this book is one helluva event, which I think is going to lead into some major excitement in the next few books.

I think that this book deserves a 4.5.  It was a very emotional book and I think I felt my icy heart crack a bit for Malkom.