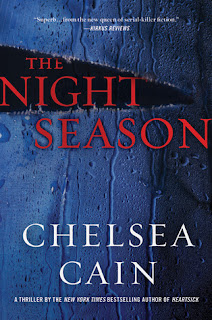 Goodreads Synopsis:  With the Beauty Killer Gretchen Lowell locked away behind bars once again, Archie Sheridan—a Portland police detective and nearly one of her victims—can finally rest a little easier. Meanwhile, the rest of the city of Portland is in crisis. Heavy rains have flooded the Willamette River, and several people have drowned in the quickly rising waters. Or at least that’s what they thought until the medical examiner discovers that the latest victim didn’t drown: She was poisoned before she went into the water. Soon after, three of those drownings are also proven to be murders. Portland has a new serial killer on its hands, and Archie and his task force have a new case.

Reporter Susan Ward is chasing this story of a new serial killer with gusto, but she’s also got another lead to follow for an entirely separate mystery: The flooding has unearthed a skeleton, a man who might have died more than sixty years ago, the last time Portland flooded this badly, when the water washed away an entire neighborhood and killed at least fifteen people. With Archie following the bizarre trail of evidence and evil deeds to catch a killer and possibly regain his life, and Susan Ward close behind, Chelsea Cain—one of today’s most talented suspense writers—launches the next installment of her bestselling series with an electric thriller.

My Review:  It was disappointing that there was no Gretchen in this book, but there was still quite a story to be told.  In my opinion, this serial killer is not even CLOSE to Gretchen.  My God, am I becoming a Gretchen groupie?  Didn’t I just say in my review of the last book that I thought the people in the book were crazy for idolizing her?

As the other books had a couple of storylines on the go at the same time, so does this one.  It is funny that both of them have to do with the flooding of Portland.  One old, one new.  The main, current killer in this story has a very strange, unique weapon.  It was really unexpected and interesting.

If you are looking for a thriller without too much information, this is probably the one in this series that is more for you.  Descriptions of Gretchen’s work in the other books will make this story seem a bit… I don’t know, mild?  Well, as “mild” as a killing can be.

Susan and her new hair color find themselves in trouble with Archie running to her rescue, but will the floods carry them all away before they can get to this killer and stop him?  It’s a race against the water, and the pacing kept you going and going.

I’m still kind of creeped out by this guy’s weapon.  It’s one I will be very surprised if you guessed before the big reveal.  I want to give this one a 3.5 out of 5.  Don’t let the lack of Gretchen put you off the rest of the series.  She’s back in the next one!