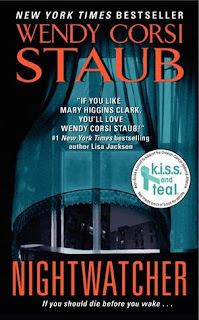 As the city sleeps in the early hours of September 10, 2001, the killer waits and watches, unaware of the cataclysm to come. Even the nightmare of 9/11 will not postpone his private reign of terror.

Allison Taylor adores her adopted city, New York, loving every minute of the invigorating urban hustle. But on a bright and clear September morning, the familiar landscape around her is savagely altered–and in the midst of widespread chaos and fear, a woman living upstairs from her is found, brutally slaughtered and mutilated.

For Allison . . . for her neighbor, James “Mack” MacKenna, desperately searching for news of his missing wife . . . for homicide detective Rocky Manzillo, hunting for a monster called “The Nightwatcher” amid the smoking ruins of a devastated city, this tragic day will hold a special horror. Because a different kind of terror has entered their lives . . . and it’s coming to claim Allison Taylor as its next victim.

My main reading genre is Paranormal Romance, as many of you can tell from the books I review.  Every once in awhile, I stray out of that genre for a break.  It is one of the reasons I joined book clubs, they give me a reason to get out of my box and take a break.  Nightwatcher by Wendy Corsi Staub was one of our book club reads.  We were going to get to meet her at Reader’s & Ritas and I wanted to get to know her writing a bit before I did.

The thriller authors that I read are a pretty small group, and I will admit I have been neglecting them.  I will now be adding Wendy to the group of my go-to authors for thrillers.

Nightwatcher is number one in a trilogy.  I just want to put that out there because many people do not like to read trilogies before they have all been released.  I did not know this when I started.

I had a hard time with the setting, and I really needed time to get around that.  I don’t know why having the story happen during 9/11 bothered me so much.  Maybe just having it in my brain that everyone should be pulling together during such a terrible time, but that there were people out there that can take advantage of that sort of freaked me out a little.  I realize now that that was probably the intention.  Duh!

This story takes you through multiple points of view.  Mainly it is Allison, but we do get glimpses from the cops, neighbors and even the killer himself.  There was one POV that I needed more from, and it is going to drive me nuts not to know his whole story.  I even PM’ed Wendy on Facebook to see if I could squeeze out some answers!  No response though, I must have been asking for a spoiler.  Sleepwalker is on my list of 2012 reads so I need to get on that one.

The book was definitely a thrill ride with scenes that left me rushing through the paragraphs to see what would happen.  It gave me moments when I wanted to scream “RUN!” and other moments that totally blew all my thoughts on what was going to happen to pieces.

I’m giving Nightwatchers a 4.5 out of 5 stars.  I still get the shivers when I think of this book.  It is just what you want with a thriller.

Oh and Wendy is really great.  She signed my books and talked about them with me.  I’m definitely a fangirl now.  Love you Wendy!  (will that get me an ARC of book 3? hahaha)