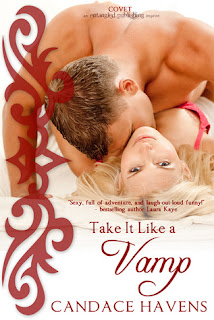 Goodreads Synopsis:  Vampire Nick Christos might have been born in the Middle Ages, but those days seem tame compared to the last eight years spent ruling the Supernatural Council. The only respite in his long days of governing is with his sweet neighbor Casey Meyers. Sure, he’s forced to take a cold shower after every encounter, but no way will he risk anything more with a human. Not with his blood thirsty ex on the prowl and out to ruin Nick’s life.

But when said crazy ex shows up at the ball and flies her freak flag high, Nick has more to worry about than keeping his hands off his neighbor. He’ll have to stay closer than ever if he hopes to keep her alive, but will she want to leave him forever when she learns the truth?

My Review:  This was a read for my bookclub, so it was a book I don’t think I would have found on my own.  I do like to read about my vamps and other supernatural characters, but I hadn’t heard much buzz on this one.  One big plus to a book club.

I really liked Casey’s character.  She is witty and fun.  She doesn’t seem to take herself too seriously.  She’s not the perfect Barbie doll and I love that about some heroines.  I like the kick-ass heroines too

Nick is Casey’s neighbor and best friend.  He’s helped her through some of life’s bumps.  Both characters secretly want each other but keep their relationship to friendship, unsure of what the other truly wants, and in Nick’s case, what the fallout of his secrets would bring.  He does now want to lose Casey’s friendship, and feels he will if she knew what he truly was.

With a little help and encouragement from some friends, Nick decides to take Casey on a “date”.  He is in a time crunch to find himself a mate and really needs it to look like he is actively trying.  Problem occurs when an old flame has her eyes set on that “mate” position.

Casey’s life is now in danger and it’s up to Nick to protect her and keep her from learning all the truths of his world.

I thought Take it Like a Vamp was a cute, campy, quick read.  Did I already say I liked Casey?  I haven’t researched this yet, but would love to see this come up as a series and the next book focus on Linc.  Linc is Nick’s best friend.  A hot, protective, hot, (and did I say hot??) character that is not afraid to stick up to his friend and give him some well needed advice.

I gave Take it Like a Vamp a 4 star rating because it was so fun.  You will want to pick it up ASAP on Kindle as it is priced at just $2.99 right now.  Awesome deal!  Click below to download it.  If there is a sequel, I can guarantee I will pick it up.

Comment your thoughts on this book, I would love to hear how you felt about it!
Happy reading mon ami!
Tanya