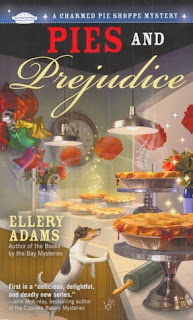 Hello Everyone!  I’ve been away from the blog for awhile.  There have been some really awesome books come out, and then something that will surprise others that know me… I joined a book club.  I real, honest, face to face book club!  Go me!  With this new adventure brings new books.  This will give me little interludes of other genre’s.  As you all know, I read mostly paranormal romance with some crime and thrillers thrown in.  I don’t normally read a lot of light, cozy books.  In fact I think the last cozy mystery I read was Madelyn Alt’s Bewitching mysteries and she hasn’t released a new one of those in a while.  On a side note, if ANYONE knows when In Charm’s Way will finally release, will they let me know?  They have it on Goodreads, but Amazon says it’s “Currently Unavailable”.  Back to the point here, it’s been a long time since I’ve read a cozy.  So here we go!  Pies and Prejudice by Ellery Adams!

Goodread’s Synopsis:
When the going gets tough, Ella Mae LaFaye bakes pies. So when she catches her husband cheating in New York, she heads back home to Havenwood, Georgia, where she can drown her sorrows in fresh fruit filling and flakey crust. But her pies aren’t just delicious. They’re having magical effects on the people who eat them–and the public is hungry for more.Discovering her hidden talent for enchantment, Ella Mae makes her own wish come true by opening the Charmed Pie Shoppe. But with her old nemesis Loralyn Gaynor making trouble, and her old crush Hugh Dylan making nice, she has more than pie on her plate. and when Loralyn’s fiancé is found dead–killed with Ella Mae’s rolling pin–it’ll take all her sweet magic to clear her name.

As I said, it’s been a long time since I have settled back and read a light, cozy mystery.  It was kind of an adjustment for me, and made it a little hard for me to get into.  Ella Mae and her family are special.  They have very unique powers.  I really liked the Aunts, they brought some good lighthearted feelings to the story.  Their belief in Ella Mae and her abilities was heartwarming.  The mystery was good, and the “death by rolling pin” was actually kind of funny.  I think the way Ella Mae accepted her abilities kind of surprised me.  I didn’t really relate to her reaction.  I know that if I found out I was making people feel and do the things I was thinking about when I cooked…. well, I guess that really isn’t something I can relate to anyway, because I do not cook!  Or on the other hand, everyone in my life would be irritated because that is what I feel when I have to cook!  I just think she accepted it so fast and without any question at all.  We could say that she was just used to these strange things in her life because of her mother and aunts all having some strange powers, I guess.

I’m going to give Pies and Prejudice 3 stars.  I didn’t hate it, but I didn’t make that emotional connection that I normally have to have to give something a 4 or 5.  I guess if I was going to put it into one word, I would say “indifferent”.